Will pay Rs 5 crore as ‘compensation’, not fine: Sri Sri on AoL event 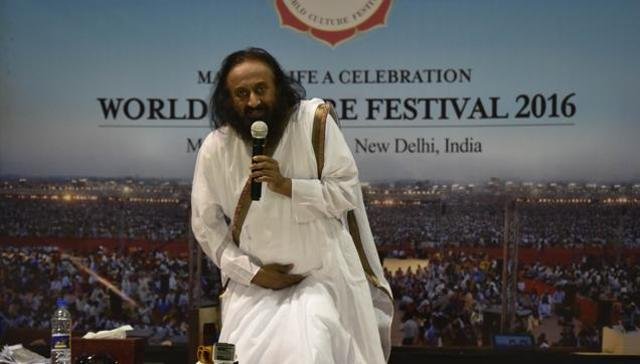 Three days after declaring he’d rather go to jail than pay a Rs 5-crore fine, Sri Sri Ravi Shankar said on Sunday his Art of Living foundation would pay the amount ordered by the national green tribunal, insisting it was “compensation” and “not a penalty”.

“The NGT has said this. This is not a penalty, not a fine… It is development compensation. A development fee for a biodiversity park,” the spiritual guru said as his foundation’s three-day World Culture Festival on the banks of the Yamuna came to a close.

The event has been controversial with environmental activists accusing the foundation of ripping up vegetation on 1,000 acres of the fragile floodplain, damaging the riverbed and disrupting water flow.

Giving the festival the go-ahead, the tribunal had ordered the organisers to pay an “initial” Rs 5 crore, with the final amount to be decided after an assessment of the damage done to the floodplain.

But the foundation failed to pay the amount by the Friday deadline, after which the tribunal directed it to pay Rs 25 lakh first and the rest within three weeks. Even then, Sri Sri Ravi Shankar insisted he’d “go to jail but not pay a penny”.

But on Sunday, he said he was willing to pay. “If it is for development, definitely… I am all for the Yamuna’s development.”

Asked if the event had impacted the environment, he said, “We consulted some environmentalists before the event and they said there would be no damage to the floodplain. We will go back to them and work on the Yamuna’s rejuvenation with a concrete plan of action.”

Sri Sri Ravi Shankar said they’d initially thought of holding the event in a stadium. “We considered the Jawaharlal Nehru Stadium. But any stadium would not have been able to accommodate these many artistes and people.”

The Art of Living founder said political parties should not politicise an event with a bearing on the country’s reputation, and suggested the media had been “harsh” in its criticism.

“I request all political parties that whenever such a grand event is being organised, party politics should be kept aside. You should come together so India’s prestige on the world stage rises.”

The foundation claimed the event drew some 20,000 foreign guests from over 150 countries.

“People from across the world are amazed. We got a letter from the Australian prime minister asking us to hold the event there… from Mexico…. At the same time, the international media is asking why the Indian press is so harsh towards this festival. I smiled and said I don’t know,” he said.