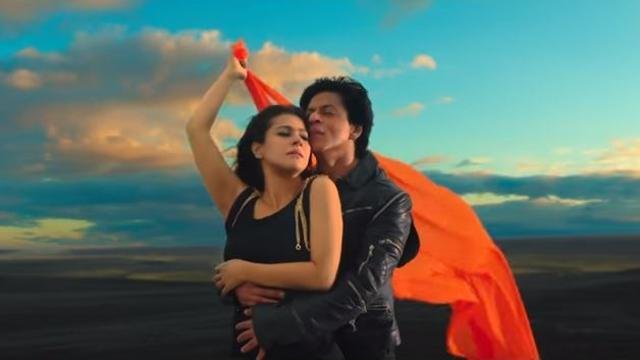 After taking Twitter by storm for two days, with Dilwale being one of the top trends over the weekend, the first trailer of the Rohit Shetty film was finally launched on Monday evening. The film brings Shah Rukh Khan and Kajol together after 2010’s My Name is Khan and is also a reunion of Rohit and the superstar after the blockbuster Chennai Express. It also stars Varun Dhawan, Kriti Sanon and Varun Sharma. The music of the film is composed by Pritam.

The two-and-a-half-minute long trailer gives you ample glimpse of the much-awaited romance in complete Shah Rukh Khan style while Rohit Shetty’s signature action and flying cars form the backdrop of the video. While SRK and Kajol are shown as lovers, theirs is not a simple story.

Towards the end of the trailer, Shah Rukh tells Kajol in an extremely romantic set-up, “Dobara apna chehra mat dikhana, jaan le lunga.” And he’s damn serious! The king Khan plays the big brother to Varun Dhawan who considers SRK to be a very simple man but he actually moves around brandishing guns and firing shots from flying cars – just a glimpse of Rohit Shetty , you see.

In less than 12 hours, the trailer has already crossed a million views on YouTube.