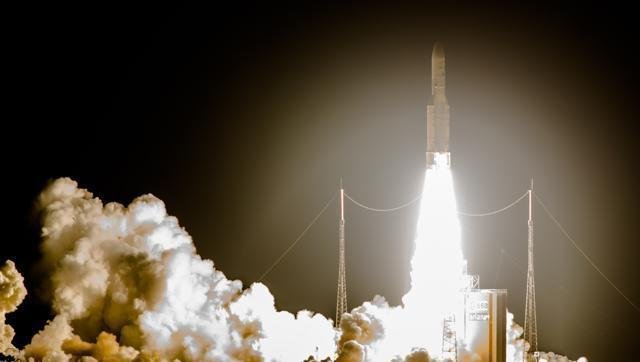 India’s latest communication satellite GSAT-15 was successfully launched by Ariane-5 rocket in the early hours on Wednesday from the spaceport of Kourou in French Guiana.

The European launcher blasted off at 03:04am (IST) and hurled the GSAT-15, designed to deliver telecommunications services, as well as dedicated navigation-aid and emergency services, into space in a flawless flight.

The satellite was launched into a Geosynchronous Transfer Orbit (GTO) after its co-passenger Arabsat-6B (BADR-7) was injected into space.

GSAT-15, weighing 3,164 kg at lift-off, is a high power satellite being inducted into the INSAT/GSAT system. It carries a total of 24 communication transponders in Ku-band as well as a GPS-Aided GEO Augmented Navigation (GAGAN) payload operating in L1 and L5 bands, Isro said adding that it is the third satellite to carry GAGAN payload after GSAT-8 and GSAT-10, which are already providing navigation services from orbit.

It also carries a Ku-band beacon as well to help in accurately pointing ground antennas towards the satellite.

GSAT-15 is the 19th payload launched by Arianespace for Isro.

Speaking at Kourou, Isro Satellite Centre (ISAC) director M Annadurai said, “GSAT-15 satellite signal has been acquired by Master Control Facility at Hassan (in Karnataka). The initialisation commands are in process and the satellite health is hail and healthy.”

Annadurai also said other two communication satellites GSAT-17 and GSAT-18 are getting ready for launch by Ariane vehicle in the next year.

“The realisation of both the satellites are in very advanced stage.”

The launch was telecast live by Doordarshan. GSAT-15 brings in Ku-band capacity to augment as well as provide replacement to indigenous operational satellite capacity, Isro said.

Indian satellite’s co-passenger Arabsat-6B, lofted for Airbus Defence and Space and Thales Alenia Space as part of a turnkey contract with Saudi Arabia-based Arabsat, was also launched by Ariane 5 VA-227.

According to Arianespace, Arabsat-6B, to be renamed BADR-7 once in orbit will provide broadcast, broadband and telecommunications services over the Middle East, Africa and Central Asia.

Ariane 5 mission had a total payload lift performance of 9,810kg. This includes the two satellites’ mass at liftoff -5,798kg for Arabsat-6B and 3,164kg for GSAT-15 – along with launcher integration hardware and Ariane 5’s dual-passenger deployment system.

The GAGAN payload in GSAT-15 provides the Satellite Based Augmentation System, through which the accuracy of the positioning information obtained from the GPS satellites is improved by a network of ground based receivers and made available to the users in the country through geostationary satellites, Isro said.

In the next few days, the MCF at Hassan will perform the initial orbit raising manoeuvres using the Liquid Apogee Motor (LAM) of the satellite to take it to its intended space home.

With the designed in-orbit operational life of 12 years, GSAT-15 will be positioned at 93.5 degree east longitude and co-located with INSAT-3A and INSAT-4B satellites.