US Slaps Sanctions On Belarus Police Over Crackdown 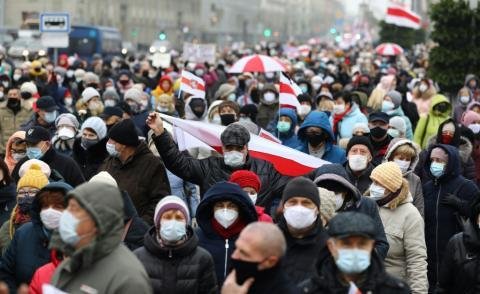 The United States on Wednesday slapped sanctions on Belarus police units and a senior security official over their violent crackdown on mass protests following the strongman leader?s contested reelection.

The Treasury Department said it will freeze any US assets and bar transactions with first deputy interior minister Gennady Kazakevich, who in October appeared in a video threatening protesters with lethal force.

“We stand with the brave people of Belarus and support their right to free and fair elections,” Secretary of State Mike Pompeo said, denouncing ongoing “efforts to undermine Belarusian democracy.”

The United States previously imposed sanctions on election authorities accused of rigging the August vote, in which President Alexander Lukashenko was declared the winner of a sixth term.

Tens of thousands of people have taken to the streets for months, believing that Svetlana Tikhanovskaya was the true winner, although in recent weeks protesters have held smaller gatherings to avoid arrest.

The United States has had sanctions in place since 2006 on Lukashenko, an ally of Russian President Vladimir Putin, over a previous crackdown on his disputed reelection.

The European Union has taken fresh measures against Lukashenko and his son over the latest violence, including a freeze on their assets and visa bans.

Pompeo paid a rare visit to Belarus in January and spoke to Lukashenko by phone in October to secure the release of a detained US citizen.