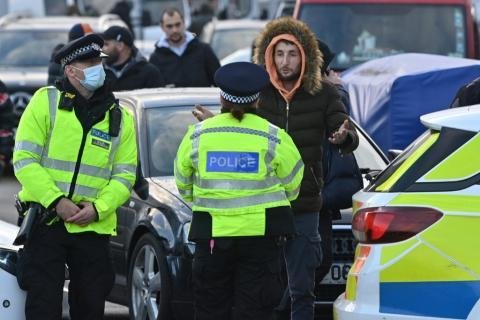 Angry lorry drivers confronted police Wednesday as thousands waited to take cargo across the Channel at an abandoned airfield in Kent, complaining of poor facilities and lack of virus tests.

“We are here two days and without shower, without water to drink,” said one of the stranded drivers, Patricia Szeweczyk from Poland.

There is a massive backlog of trucks at the site after France on Sunday banned all travel from Britain for 48 hours over the spread of a new strain of the coronavirus.

Wearing a yellow raincoat, Szeweczyk argued with a policeman as several dozen protesters blocked a roundabout outside Manston Airport in Kent, southeast England.

Drivers raised their arms and pushed against police, shouting, during the scuffles.

They complained of inadequate facilities and a lack of virus tests.

Drivers have nothing to eat and cooking facilities are “dangerous” at the lorry park, one said
AFP / JUSTIN TALLIS


Drivers have nothing to eat and cooking facilities are “dangerous” at the lorry park, complained Szeweczyk.

Police bundled one man into a van before convincing the protesters to return to their vehicles and await virus testing to allow them to proceed on their journeys, an AFP journalist saw.

Kent police said they responded to “disturbances” at Manston and Dover.

“One man has been arrested for obstructing a highway in Dover and remains in custody,” police said.

The Department of Transport, which runs the facility, said it provides “access to food and welfare facilities”.

Thousands of lorries were diverted to the disused airport after France closed its borders for 48 hours to contain the spread of a new, more infectious strain of coronavirus.

On Wednesday there were 3,800 vehicles at Manston and 1,242 in other holding areas, according to the Driver and Vehicle Standards Agency.


The dramatic sight of the thousands of parked lorries dominated newspaper front pages on Wednesday.

France late Tuesday agreed to let people cross who have tested negative for coronavirus and the UK authorities have promised to provide the vast backlog of drivers with rapid tests that give a result within half an hour.

British Transport Secretary Grant Shapps said that “testing has begun as we look to get traffic moving again between the UK and France.”

At the same time he warned that “severe delays continue. Please AVOID Kent while the backlog is cleared.”

The defence ministry said it was sending 170 soldiers to help with virus testing.


Drivers said they expected to be there for days, including over Christmas Day on Friday.

“They say the test of Covid is coming for us. Nothing is there, nothing is coming,” said Polish driver, Ezdrasz Szwaja.

“We don’t have information, nothing…”

“We have been here two days already and I worked out it will take another two days to sort all this out. There are a lot of trucks,” said Spanish driver Pablo Mora, waiting with his lorry in the nearby town of Folkestone.

Sitting in his lorry’s cabin, German driver Sergej Merkel said he expected to be tested within a day or so but would then wait for a slot to travel across.

“So Christmas time, we will spend here in our truck,” Merkel forecast.

At Manston Airport, Polish driver Szwaja choked with emotion as he talked about being away from his two “very small” children for Christmas.

German driver Merkel said it was his “first time here in England, and possibly it’s last time, you know.”

He was parked along a row of lorries in Folkestone, about 7 miles (11 kilometres) southwest of Dover.

“We have enough freight in Europe, in Germany, Netherlands, Belgium,” he said.

“With such terrible days as these, I think lots of drivers will not be interested in coming back to England.”