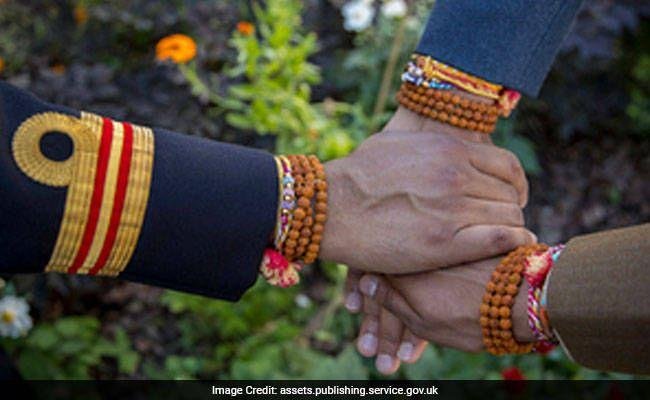 The event was celebrated at the Shree Swaminarayan Mandir in London on Friday.

Speaking at the event, minister of state in ministry of defence in the House of Lords, Earl Howe said the festival’s “potent symbol” resonated to all servicemen of all kinds of faith.

“The tying of Rakhi to symbolise bonds of mutual protection is a potent symbol for all here today and one that resonates beyond the Hindu religion to all servicemen and women, whatever their beliefs,” he said.

“The festival holds particular significance for the armed forces as it celebrates and emphasises their duty in protecting their society,” a press release by the UK Ministry of Defence said.

General Gordon Messenger, the UK’s Vice Chief of Defence Staff, said many values like courage, commitment, discipline, respect, integrity and loyal “as illustrated in many Hindu epics and scriptures, perfectly reflect the values of the armed forces”.

“The resonance between the Hindu community and service personnel over the messages championed by the Raksha Bandhan festival is very clear,” said General Messenger.

The event was also “to celebrate the contribution of Hindus to the defence of the UK”, the press release further said.

“There are currently around 2,500 Hindus serving in the armed forces and they continue the proud tradition of their predecessors in serving their country, upholding the values that we all hold dear,” said Armed Forces Hindu Network Champion, Rear Admiral Graeme Mackay.

“They are as much part of the future of the armed forces, if not more so, as they are of our past,” he added.