Shahid Kapoor, Kareena Kapoor Khan to avoid one another during Udta Punjab promotions 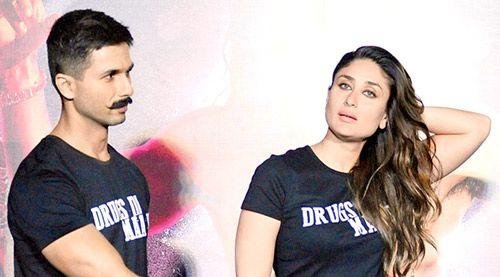 Is it possible for former lovers to be friends? Going by Shahid Kapoor and Kareena Kapoor’s conduct, it seems not. Apparently the two have decided not to be seen together at any promotional event for their forthcoming film Udta Punjab.

Says a source close to the project, “Shahid Kapoor and Kareena Kapoor Khan agreed to be part ofUdta Punjab because they had no scenes together. Then they reluctantly agreed to be together at the trailer launch together, but made sure Alia Bhatt stood between them. Still, it was very uncomfortable for them both to be present at the same venue. They’ve now instructed the film’s marketing team to not club them together at any Udta Punjab event.”

So when now we know what happened jab they met.