Shah Rukh Khan -Salman Khan whoop it up as Karan-Arjun 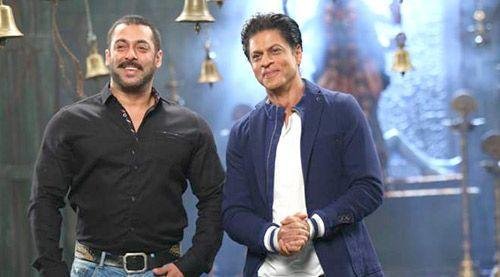 Karan-Arjun are back. No, not in a sequel to Rakesh Roshan’s blockbuster. But Shah Rukh Khan and Salman Khan, not-so-friendly until recently and now back to being bum chums, had a whale of time at Mehboob Studios in Bandra Mumbai on Tuesday afternoon when they shot a very special promo for Shah Rukh’s episode with Salman on Bigg Boss .

But what happened after the shooting was far more interesting.

Recounts an eyewitness, “The two Khans really REALLY bonded. Shah Rukh was supposed to slip into Mehboob Studios which is next to his Mannat and very close to Salman’s home too, quickly shoot the promo for Bigg Boss and leave. But they stayed on for a good 5 hours. They had lunch together and they spoke their hearts to each other. Their dosti is now fully re-kindled. Yes, Karan and Arjun are BACK!”

In fact the Bigg Boss promo for the SRK episode will feature the ‘Karan-Arjun are back together’ refrain.

Do we see the third Khan superstar sulking in a corner?