Shabana Azmi opposes the fatwa against A R Rahman 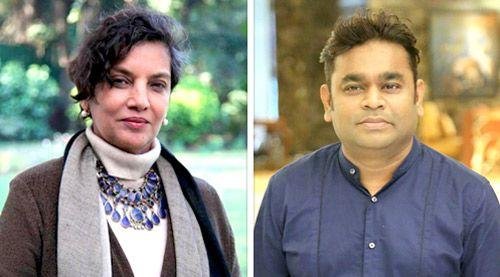 The fatwa against the very gentle God-fearing A R Rahman for his association with Majid Majidi’s film Muhammad Messenger Of God has sent shock waves across the film industry. While many have expressed their solidarity with the soft spoken Rahman in private, not too many have come out to support him openly

Fearless and forthright Shabana Azmi has spoken out.

Reacting to the fatwa Shabana says, “Firstly it’s important to understand what a fatwa is. It is being bandied about without knowing facts. A fatwa can only be issued by a mufti in response to a question raised by a person or a group. The mufti cannot issue a fatwa suo moto and neither can he impose it. A fatwa is purely a recommendation and is not binding.”

She also questions the authority and validity of those who have issued the fatwa against Rahman. “The Raza Academy has no locus standi and its self-appointed stance of speaking for all Muslims has no takers. What have they done for the welfare of the community except inflame passions? Have they seen the film? The answer is, no. So how can they presume that it will be hurtful to believers?”

Shabana Azmi reveals she was herself a victim of Rahman’s predicament. “The Raza Academy had issued a fatwa against me in the Nelson Mandela case (controversy over a peck she had planted on the patriarchal Mandela’s cheek). I ignored them, and that was that.”

She attributes the heightened interest in the fatwa on Rahman to the mediatization of such controversies. “When the so-called fatwa happened to me there was no electronic media and no internet then. My advice to the media is to ignore them and not play straight into the hands of Raza Academy and the likes who seize any opportunity to spring into national headlines!”

When asked what she thought of the film, Shabana admitted, “I haven’t seen the film so I can’t comment on it. But A.R Rahman is a devout Muslim apart from being an exceptional artist and Majid Majidi an internationally renowned film director greatly respected for his cinema of humanism. It is hardly likely that both these exceptionally talented people would make a film that could hurt the sentiments of believers of the Faith. I stand in solidarity with AR Rahman and Majid Majidi.”