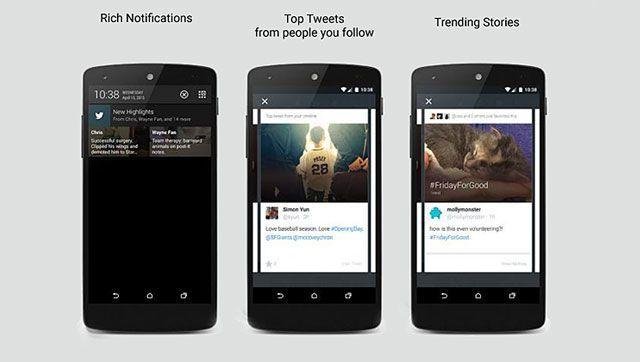 Twitter Inc on Wednesday unveiled Highlights, which it calls a simple summary of the most interesting things on Twitter for you, delivered via rich push notifications.

Highlights is being pitched as a fast, simple Twitter summary that lets users cut through the clutter of their chronological timeline and catch up quickly on interesting stuff that is most relevant to them.

Hightlights show up as a ‘Rich notification’ on the user’s mobile, clicking on the notification leads the user to the curated content which are presented in a simple-card style interface. Once the user swipes through all the ‘highlights’ they are taken to their Twitter feed.

To create Highlights, Twitter looks at things like the accounts and conversations that are popular among people the user follows, Tweets from people they are closely tied to, topics and events that are trending in the user’s area in addition to people who are popular or trending.

Gordon Luk, who leads the team that created Highlights is no stranger to context based notifications. He co-developed Cover a custom lock screen for Android that adapts to show a users top productivity apps at work, favourite entertainment apps at home, and driving apps in the car. In April, last year Cover was acquired by Twitter.

“Highlights is a fast, simple summary of Twitter. It delivers the most relevant content to the user through notifications. We’re rolling out highlights on Wednesday in more than 35 languages across the world,” Luk told HT in an exclusive interview.

On being asked about the similarity between Highlights and Cover, Luk said, “With Cover, we were trying to show right apps based on contextual signals. With Highlights we wanted to have a signal-based algorithm where we could deliver content to a user.”

The problem with Highlights is that it’s not particularly innovative. Gmail already does this with priority inbox. Facebook solves its information overload by only showing you things that it thinks you need to see. News apps like Digg Reader and Nuzzel use intelligent signals from your social networks to send you push notifications of popular articles. So the only boundaries Twitter is pushing is it’s own.

Highlights comes at a time when there have been speculations regarding Twitter’s lack of growth. In a conference call with financial analysts in August, the company’s CFO Anthony Noto said that stats indicate that “We’ve only reached early adopters and tech enthusiasts. And we’ve not yet reached the next cohort of users known as the mass market.”

“Non-users can continue to ask: ‘Why should I use Twitter?”, Noto said, adding that for those who don’t regularly use the micro-blogging platform, it remains “too difficult to use.”

Highlights might be a remedy to this glaring problem, Luk says, “We’re putting a lot of effort to find the best content and deliver it to the users. We plan on doing that with push notifications, which makes it unique in some regards.”

But if people only see the highlights, is there a risk of fall in engagement for the rest of Twitter?

Luk doesn’t think so, “We wanted to observe very closely the total time people spent. People spent more time in the app as a result of highlights. We look at this data holistically. Because of the design of the product, the final swipe dismisses it. There’s a very small seam between the two.”

The rollout of Highlights is limited to Android at launch, “We feel that Android is a nice platform. It offers more flexibility with push notifications, plus this overlaps with personal experience. Also Android has a bigger market share in emerging markets. Android is the first choice in developing countries.” said Luk.