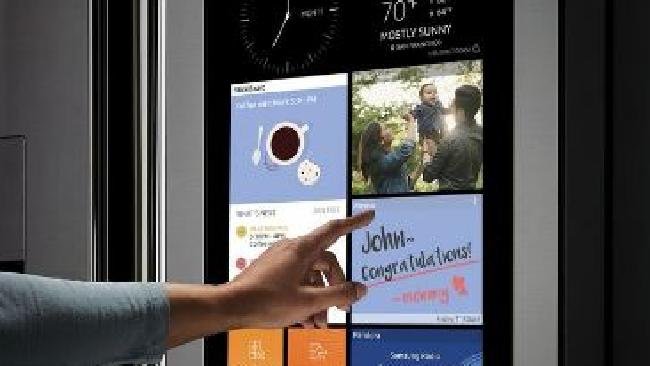 FRIDGES that order groceries for you, buttons that tell you when your clothes are clean, and miniature robots that control your kitchen appliances were among the devices revealed in Berlin today that promise to make your home smarter.

And far from empty promises, some of the technology is due to launch in Australia within weeks.

The internet-savvy products were unveiled the day before technology tradeshow IFA opened to the public, with Samsung using the event to reveal its internet-savvy fridge would launch in Australia later this month.

Samsung Electronics Australia chief marketing officer Phil Newton said the company’s Family Hub Refrigerator not only featured three connected cameras to let you check on its contents while at the supermarket, but users would be able to leave notes and watch TV shows on its 21-inch touchscreen.

“We’ve developed local apps for the fridge so you can go shopping online from it,” he said.

The four-door, 671 litre fridge would cost $7499, Mr Newton said, and could also be used as a hub to control internet-connected SmartThings devices such as locks and cameras when Samsung launched them in Australia “next year”.

Sony also revealed a raft of innovative smart home products the day before IFA, showing off an improved version of its yet-to-be-released domestic robot, the Xperia Agent.

The tabletop robot was designed with an approachable shape and artificial blinking eyes to inspire “human-like interaction,” Sony smart product specialist Oscar Romero said, so users would feel comfortable asking it to control everything from connected air conditioners to washing machines.

“In Japan, we’re working with Nestle and connecting the Agent to its coffee machines. It can recognise you (with its camera) and you can ask it to make your regular coffee that you always have.”

Sony also showed off an enhanced version of its portable, internet-connected Xperia Projector that could be used to show off video calls, interactive games like Fruit Ninja, shared calendars, and notes on a table or wall at home.

Mr Romero said the Projector was designed to be “a tool for communication and interaction” in family homes.

LG also joined the smart home trend with a range of Smart ThinQ home automation devices including a Hub to respond to your requests and show information like the weather, and button-shaped sensors that could be programmed to send an alert when your washing machine had finished, when a door had been opened, or when smoke was detected in your home.

A spokeswoman said the Smart ThinQ devices would start to roll out worldwide from early next year.

The IFA technology tradeshow, hosting more than 1800 firms from around the world, will officially open in Berlin tomorrow.