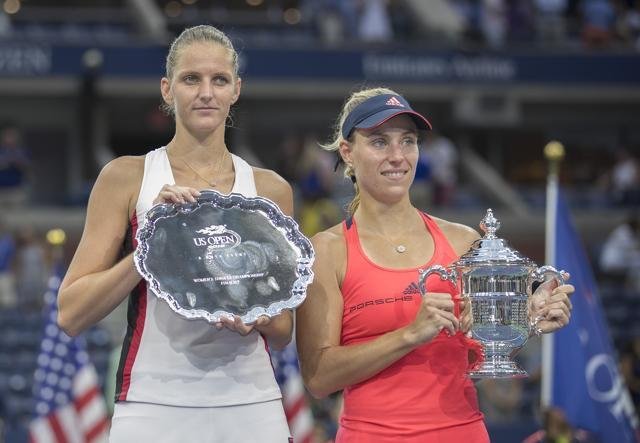 Karolina Pliskova suffered a narrow defeat at the hands of Angelique Kerber in the US Open final on Saturday, but the Czech 10th seed also proved her mettle as one of the most dangerous attacking players in women’s tennis.

The 6-foot 1-inch (185 cm) Pliskova fought back from a set down at Arthur Ashe Stadium to give Kerber, one of the best defensive players in history, a major scare in the championship match of the year’s final Grand Slam. Kerber finally prevailed 6-3, 4-6, 6-4.

Kerber will move to the number one world ranking on Monday.

That in part is due to 24-year-old Pliskova’s previous win. She felled top-seeded American Serena Williams in straight sets in the semi-finals, and took down sister Venus Williams earlier in the tournament.

For Pliskova, making the final was the best showing of her five-year professional career. Ranked No. 11 in the world, she had not previously advanced beyond the third round of a major.

Kerber’s win ended an 11-match winning streak for the big-serving Pliskova, who had beaten the German just three weeks earlier in the Cincinnati final.

Pliskova said she hopes it will be the first of many Slam finals.

“I found out I can play my best tennis on these big courts,” she told reporters. “I believe I can win matches like this next time.”

Though Pliskova prefers blistering groundstrokes to the serve-and-volley game that defined past Czech champions such as Martina Navratilova and Helena Sukova, her serve remains her biggest weapon.

She has crushed more aces than any other player on the WTA tour this year, but on Saturday that weapon was not quite enough.

In the muggy air at Flushing Meadows, the average speed of her first serve, 102mph (164 kph), was her slowest of the tournament.

Although Pliskova won 80% of her serve-and-volley points, she deployed the tactic only ten times.

Against the fierce counterpunching German, Pliskova said she had to try everything in her toolbox to take control of points.

She made 47 unforced errors, against just 17 for Kerber, but on the other side of the equation hit nearly twice as many winners, 40 to the German’s 21.

“You know, it’s never easy for the player who is attacking and is doing more mistakes,” Pliskova said.

“She’s really grown as a player,” Fernandez said. “I don’t think Serena’s going anywhere but it gets more difficult as the younger players come up.”