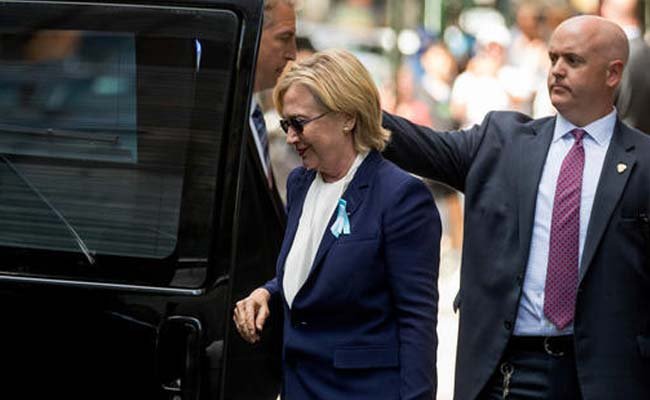 NEW YORK:  Democratic presidential candidate Hillary Clinton fell ill during a memorial service marking the 15th anniversary of the Sept. 11, 2001, terrorist attacks, leaving abruptly and inserting new speculation about her health into a presidential campaign in which Republican Donald Trump has called her weak and unfit.

Video of Clinton’s hurried departure from the Ground Zero memorial showed her buckling and stumbling as she got into her van. Clinton’s campaign issued a statement from her doctor later Sunday revealing that she had been diagnosed with pneumonia two days earlier.

The video, circulated on Twitter, appeared to show Clinton, 68, flanked by several Secret Service agents, leaning against a security bollard while agents prepare to help her into a black van. As she steps forward, Clinton can be seen falling as agents help lift her into the van.

“Secretary Clinton has been experiencing a cough related to allergies,” Dr. Lisa R. Bardack said in the statement. “On Friday, during follow up evaluation of her prolonged cough, she was diagnosed with pneumonia. She was put on antibiotics, and advised to rest and modify her schedule. While at this morning’s event, she became overheated and dehydrated. I have just examined her and she is now re-hydrated and recovering nicely.”
A planned trip to California and Nevada early this week is now under review, campaign officials said.

Clinton was not seen for more than two hours, after which she emerged from Chelsea Clinton’s apartment building, walking normally, smiling and waving.

The incident quickly renewed attention to Clinton’s health. Trump has repeatedly questioned her well-being, saying that she doesn’t have the “strength” or “stamina” for the presidency and accusing her of being “exhausted” and sleeping too much.

A coughing episode on Labor Day had prompted a fresh round of questions about Clinton’s health. During a speech during a festival in Cleveland, Clinton started coughing repeatedly at the outset of her remarks, took several sips of water and a lozenge and continued to sound hoarse as she spoke. Later that day, Clinton told reporters her condition was due to “seasonal allergies.”

An initial campaign statement about Sunday’s illness did not mention the pneumonia diagnosis from two days prior, adding to public speculation that the campaign was hiding something. Clinton has followed an intensely busy schedule in recent days, and had appeared healthy when she convened a meeting of national security experts Friday afternoon in New York and then spoke at a fundraising party that night. It was at that fundraiser where Clinton ignited a contrversy by claiming that “half” of Trump’s supporters are in a “basket of deplorables.

Neither Trump, who is 70, nor his aides responded to requests for comment Sunday; nor did he weigh in on Twitter or in television interviews, as he is known to do. But attacks from him and his allies, including former New York mayor Rudy Giuliani, have intensified in the past month as unverified and often debunked theories about Clinton’s health have floated around the Internet. And Sunday’s incident prompted an avalanche of speculation on social media from other Clinton critics.

According to two Trump advisers, Trump decided to stay away from seizing on the Sunday incident, with the aim of bringing Clinton’s “deplorables” comments – for which she has expressed regret – back to the forefront of the campaign this week and avoiding any chance for Clinton to say that Trump was overstepping on the health front.

If confronted by reporters about Clinton’s health, Trump plans to say he hopes she gets well and may raise questions about the campaign’s transparency Sunday, they added. The advisers spoke on the condition of anonymity since they were not authorized to discuss campaign deliberations.

The advisers spoke on the condition of anonymity since they were not authorized to discuss campaign deliberations.

Both Clinton and Trump had planned to take the day off from formal campaigning in observance of the Sept. 11 anniversary. Trump attended the same memorial service at Ground Zero.

Rep. Peter King, R-N.Y., a Long Island congressman who stood with Trump’s group at the ceremony, said he spoke with Trump shortly after Clinton departed.

“It was actually Trump who told me what was going on,” King said in an interview Sunday. “He leaned over and told me that ‘Hillary wasn’t feeling well.’ I said, ‘Really?’ That was all he said.”

A former Secret Service agent said that the detail’s movements show they had not planned for her to leave that early and had to make up some rushed security plans on the fly. Clinton’s van was not in place when she arrived at the curb and her detail leader, normally in charge of sticking by her side at all times, had to leave her momentarily to open the door of her van.

A small group of reporters traveling with Clinton were left behind, and not immediately informed that she had left.

Clinton had arrived at the memorial site at 8:18 a.m. Reporters traveling with Clinton became aware about 9:36 a.m. that she was no longer standing where she had been, near several Democratic officials. By 9:48 a.m., her campaign confirmed that Clinton had left the viewing area but offered no more details until about 11 a.m.

Later, shortly before noon, as Clinton exited her daughter’s apartment on East 26th Street, she hugged a young girl and posed for a picture, waved and briefly answered questions shouted by waiting reporters before she departed in her motorcade.

Just before noon, it was 82 degrees and humid at Ground Zero, though it was probably a bit cooler when Clinton had left two hours earlier.

“It was pretty hot out there, but she seemed fine to me, and left on her own accord,” said Sen. Chuck Schumer, D-N.Y., who also attended the ceremony, in an emailed statement.

Rep. Joe Crowley, D-N.Y., said it is unfortunate that this episode will feed into conspiracies about Clinton’s health. He said anyone could have been similarly affecte,d and Clinton tends to be held to her own “demigod” status.

Clinton has been generally healthy, with the exception of clotting in one leg in 1998 and a concussion and associated health problems from a fall in December 2012. But she has been attacked repeatedly by critics and accused of hiding more serious health issues.

Giuliani, a close adviser to Trump who is regularly at his side on the campaign trail, said last month that he thinks Clinton is “tired” and “looks sick.”

“What you’ve got to do is go online,” Giuliani said on “Fox News Sunday” in late August, accusing the media of hiding information about Clinton’s health. “So, go online and put down Hillary Clinton illness, take a look at the videos for yourself.”

Trump showed up to the ceremony with no advanced notice to reporters who cover him, and there were no arrangements for a press pool. This is not the first time that Trump has dodged having a press pool – last month he traveled without the press to Louisiana to view flood damage and to Mexico City to meet with the Mexican president. On Saturday, he traveled to St. Louis for the funeral of Phyllis Schlafly.

After attending the ceremony, Trump and Giuliani briefly visited New York City Fire Department Rescue Company 1. An NBC News reporter there asked Trump about Clinton’s “health incident this morning.” Trump shook his head, frowned and said: “I don’t know anything about it.”

Trump, 70, would become the oldest president ever elected. In December, Trump released a four-paragraph letter signed by Dr. Harold N. Bornstein of Lenox Hill Hospital in Manhattan that contained few specifics but declared that Trump would “be the healthiest individual ever elected to the presidency.”

The letter pales in comparison to the more than 1,000 pages of medical records released in May 2008 by Sen. John McCain, who was then 71 and went on to become the Republican nominee. The records detailed eight years of care McCain received while fighting cancer. Trump’s spokeswoman, Hope Hicks, said in late August that Trump has “no problem” releasing a full medical history, as long as Clinton does the same. Last week, Trump said that he is willing to go first. On Friday, “The Dr. Oz Show” announced that Trump and his daughter, Ivanka Trump, will appear on the show on Sept. 15 to discuss Trump’s “own personal health regimen.”

Clinton’s 2012 episode led to a brief hospitalization for a blood clot in her head. Details on Clinton’s condition were initially hard to come by, but her State Department office eventually provided extensive medical information.

Clinton wore special corrective glasses for some months afterward, and her husband, former president Bill Clinton, told an audience in 2014 that it had taken about six months for his wife to recover fully. Clinton herself has said she was surprised by the illness, because she had not experienced anything like it before.

Clinton’s campaign released a memo from her personal physician, Bardack, last summer, pronouncing the candidate healthy and suffering no lasting effects from the concussion.

The 2012 concussion caused concern among Clinton friends and supporters who hoped she would make a second run for the presidency, some of whom predicted correctly that the episode would fuel speculation that Clinton was too frail to be commander in chief.

Her campaign dismisses any suggestion that the candidate is not up to the job, while suggesting that the speculation is an example of a sexist double standard not applied to male candidates.

Clinton is the first woman to become a major party nominee. The health questions come as she is attempting to present a more personal and direct appeal to voters that focuses on her credentials and background.

As rumors have mounted about Clinton’s health in recent weeks, her running mate, Sen. Tim Kaine of Virginia, has inserted a short section into his speeches about how much stamina she has.

During a keynote address Saturday night at a Human Rights Campaign dinner, Kaine said: “I can’t imagine the stamina and energy it takes to run this campaign for 18 months,” Kaine added. “This is one determined lady.”