NASA Chasing Down Asteroid To Scoop Up, Bring Back Samples 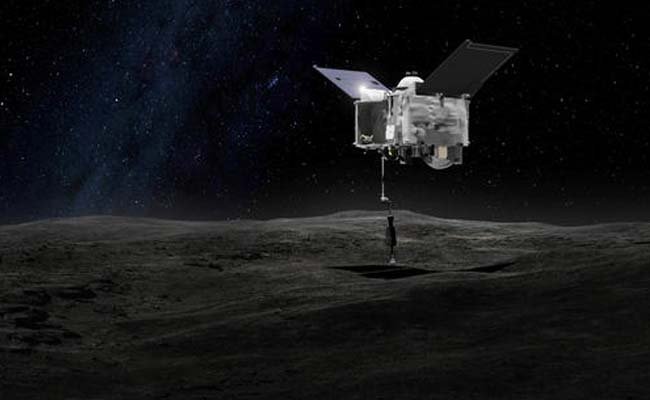 CAPE CANAVERAL, FLORIDA: NASA is going after an asteroid this week like never before.

It’s launching a spacecraft to the exotic black rock named Bennu, vacuuming up handfuls of gravel from the surface, and then in a grand finale, delivering the pay dirt all the way back to Earth.

The mission will take seven years, from Thursday night’s planned liftoff from Cape Canaveral to the return of the asteroid samples in 2023, and cover an incredible 4 billion miles (6 ½ billion kilometers) through space.

It promises to be the biggest cosmic bounty since the Apollo moon rocks, hand-picked and delivered by astronauts in the late 1960s and early 1970s.

NASA has already brought back comet dust and specks of solar wind. And Japan already did it at an asteroid a decade ago, and is en route to a second space rock encounter. But we’re talking tiny grains in these cases.

NASA’s robotic asteroid hunter, Osiris-Rex, is designed to scoop up pebbles and rock the size of gravel – anywhere from one to four or even five handfuls in a single swipe.

“We are going out to explore an unknown world,” said principal scientist Dante Lauretta of the University of Arizona at Tucson. “We’re going to map it in great detail. It will be the most well characterized asteroid in our solar system by the time we’re through with it.”
Thanks to observations from the Hubble and Spitzer space telescopes and ground observatories, scientists already know the roundish Bennu (BEN’-oo) is about 1,600 feet (487 meters) across at its bulging middle and the color of coal, indicative of carbon richness. It’s believed to have formed 4.5 billion years ago, a remnant of the solar system’s building blocks. As such, it may still hold clues as to the origin of life on Earth and, possibly, elsewhere in the solar system.

The name Bennu comes from the heron of Egyptian mythology. Osiris was an Egyptian god; Osiris-Rex is an acronym for origins, spectral interpretation, resource identification, security-regolith explorer.

There’s also a practical side to the more than $800 million mission: planetary defense.

Bennu is one of many near-Earth asteroids that occasionally cross paths with our planet. The more scientists know about these potentially hazardous rocks, the better the chance of tracking them and, worst comes to worst, bracing for them.

Bennu wouldn’t obliterate Earth or wipe out life, just carve out a huge crater. Lauretta said the odds of a direct hit by Bennu are low – less than one-tenth of 1 percent – and not until about 150 years from now.

“So I like to say, ‘Don’t run out and buy asteroid insurance tonight, you’re not going to need it,’ ” Lauretta said.

You can, however, mark your calendars for the Osiris-Rex flight plan:

-Thursday: Launch of Osiris-Rex spacecraft atop an unmanned Atlas V rocket from Cape Canaveral Air Force Station. Good weather is expected for the planned 7:05 pm EDT liftoff. NASA has until mid-October to send the SUV-size spacecraft on its way. With its twin solar wings, it resembles a boxy bird.

-September 22, 2017: Osiris-Rex swings by Earth for a gravity assist toward Bennu, putting it in the same orbital plane. Onboard cameras will snap and send pictures of the home planet. The spacecraft will come within 10,000 miles (16,100 kilometers) to 17,000 miles (27,400 kilometers) of Earth.

-August 2018: Osiris-Rex arrives at Bennu. The spacecraft will fly in formation with the asteroid, as well as orbit it from an altitude of less than a half mile – roughly 700 meters – in search of the best real estate for the sample grab. Early on, mission designers considered an actual landing, but determined it would be too risky. Given the unknowns about Bennu’s surface, a quick touch-and-go was considered more reliable.

-July 2020: Osiris-Rex goes for the cosmic gold, flying close to the surface and reaching out with its 10-foot (3-meter) robotic arm. It will fire nitrogen gas to stir up the surface, and like a vacuum, suck in the loosened dirt and gravel. Scientists want at least 2 ounces (60 grams). In all, the spacecraft can try three times to gather samples before it runs out of nitrogen gas.

Testing on Earth has yielded as much as 14 to 18 ounces (400 to 500 grams) per attempt. Scientists won’t go for second helpings, if they get what they need on the first bite. And scientific observations will cease once the samples are collected. “It’s all about keeping that precious sample safe, doing nothing that can possibly jeopardize it,” NASA project scientist Jason Dworkin said at a news conference Tuesday

-March 2021: Osiris-Rex leaves Bennu and heads back to Earth.
This is when the asteroid and our planet are best aligned in space for the trip home. The samples will come back in the same kind of container as the comet dust from NASA’s Stardust mission in 2006. “The big prize,” as NASA program scientist Jeff Grossman calls it, will be free of contamination. Incoming chunks of asteroids are altered as they plunge through the atmosphere and smash into Earth, and it’s impossible to know where these pieces come from.

-Septmber 24, 2023: Finally free of Osiris-Rex, which will continue to orbit the sun, the sample container re-enters the atmosphere at more than 27,000 mph (43,450 kph). Parachutes will slow the descent as the container comes in for a touchdown at Utah Test and Training Range, west of Salt Lake City. The container will end up at Johnson Space Center in Houston, its final destination.

“It really is a great adventure … we are bringing back scientific treasure,” Lauretta said.