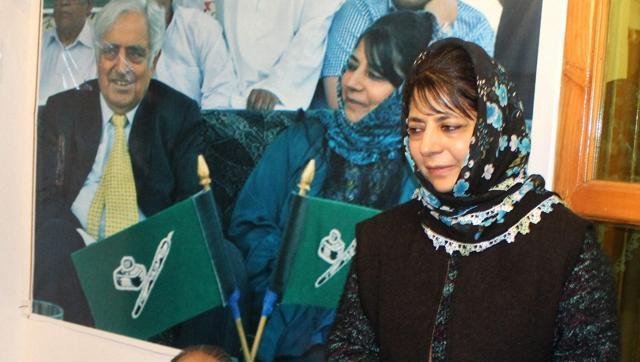 PDP and BJP are likely to jointly meet Jammu and Kashmir governor NN Vohra on Saturday and stake claim to form the new government, ending the over two-month deadlock soon. With this, Mehbooba Mufti is all set to become the first woman chief minister of the state.

A day after Mehbooba, 56, was unanimously elected as the PDP’s legislature party leader and nominated as the party’s CM candidate, 25 members of BJP met in Jammu on Saturday and elected Nirmal Singh as its leader.

Singh will again be the deputy CM in the new cabinet, a post he had held in the Mufti Mohammed Syeed’s dispensation.

Sources said both PDP, with 27 members in the 87-member assembly, and BJP will seek time from the governor for Saturday and stake their claim to form the government.

Mehbooba will hand over a letter staking claim to form the government while Singh will hand over the letter from the BJP side supporting her claim, the sources said.

The governor had summoned both presidents of PDP and BJP separately on Friday for consultations on government formation in the state.

The sources said that both the parties mutually decided to postpone Friday’s meeting and seek time for a meeting so that their two leaders can jointly call on the governor and apprise him about the decision of the legislative parties of PDP and BJP.

Friday’s BJP meeting was attended by Madhav, who is also the party’s national general secretary, and minister of state in PMO Jitendra Singh.

Brushing aside rumours over differences over distribution of portfolios, both the parties said the alliance was being worked out on the lines as decided under the leadership of Mufti Mohammed Sayeed, who died on January seven this year.

Jitendra Singh ruled out any differences between the coalition partners BJP and PDP and said “there was never a breakdown in the coalition between BJP and PDP. I think this is the continuation of the process which started about a year back.”

“…when you are in a coalition you have to accommodate each other’s priorities and each other’s preferences. That is precisely we do in a healthy coalition to augur well for the state of Jammu and Kashmir.”

“As we have decided to form the government with PDP, we will support the chief ministerial candidate of PDP”, BJP state president Sat Sharma said.

PDP and BJP had formed an alliance on March one, last year with Sayeed as the chief minister. Both the sides had formed an Agenda of Alliance which sought to address internal and external dimension of the state.

Governor’s rule was imposed in J-K on January 8 after Mehbooba decided against taking over the reins after her father’s death.