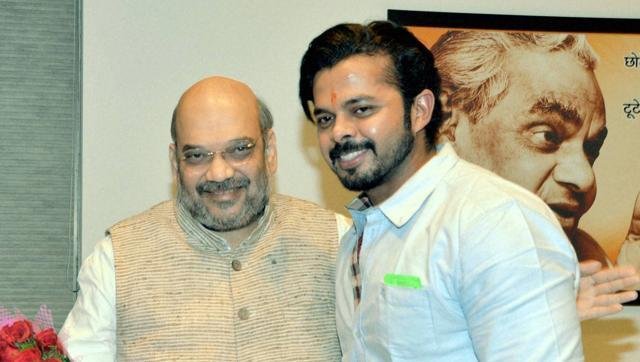 Former cricketer S Sreesanth was on Friday evening declared the BJP’s candidate from the Thiruvananthapuram consituency for the Kerala assembly polls after he formally joined the party.

The Central Election Committee of the party met at the BJP headquarters and approved Sreesanth’s name along with finalising the list of candidates for 51 seats in Kerala which goes to polls on May 16.

According to sources, the Bharatiya Janata Party took long to finalise the cricketer’s candidature because the RSS had reservations about fielding him from the state.

Sreesanth was given a life ban by the BCCI in September 2013 after being found guilty of spot-fixing in that year’s IPL tournament. However, a Delhi court exonerated Sreesanth along with two other cricketers–Ankeet Chavan and Ajit Chandila–in July 2015 in the high-profile IPL match-fixing case which had blown the lid off cricket’s biggest scandal in recent times.

The BCCI, however, had said the ban on the cricketers will continue.

Talking to reporters at a media briefing, 33-year-old Sreesanth said his name has been cleared by the court in a match-fixing case and he is, therefore, not worried about any Opposition attack on him regarding the controversy.

The BJP, which is hoping to recover from the electoral debacles in Delhi and Bihar, is optimistic about increasing its vote share in Kerala; the party however does not have enough leaders with a mass-connect.

An increase of about four percent in its vote share in the 2014 general elections, has given the party a sliver of hope about its growing footprint in the communist-dominated Kerala. It is also banking heavily on the cadres of its ideological mentor the RSS, to help turn the tide in its favour. The RSS has the highest number of shakhas in the state.

Both the RSS and the BJP have, however, flagged the issue of violence against their members, allegedly perpetrated by the Left parties. The BJP petitioned the Election Commission recently, pointing out that continued violence in the state against its members, does not inspire confidence of the polls being conducted in a free and fair manner.