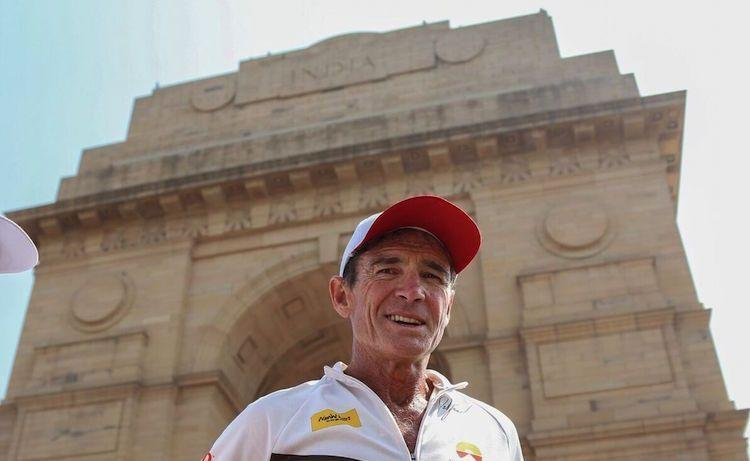 Life is better in running shoes someone has rightly said and yes Australia’s ultra marathon runner Pat Farmer has proved it.
The former Member of the Australian House of Representatives on Sunday reached India Gate completing 3,400 km out of the 4,600 km of his inspiring journey.
Speaking to ANI, Farmer said there were three main reasons why he chose to run in India.
“Firstly to have great relations between two democracies (India and Australia), secondly to raise money to support girls education in India through Nanhi Kali foundation and thirdly to motivate people in India and make this country (India) one of the greatest democracies on earth,” Farmer said.
Speaking on his fitness regime, Farmer said he followed a strict diet including coconut water and he is in the country to motivate people to make a difference.
“I am turning 54 tomorrow and want to send the message to people across India that one person can make a difference. I am proving everybody that age is not a barrier,” he said.
Farmer is scheduled to meet Prime Minister Narendra Modi on Monday at around 10 am before leaving for Srinagar to complete his run. He is expected to reach Srinagar by March 30.
Farmer is running in India to raise fund for girls education through Nanhi Kali foundation.
He was Parliamentary Secretary for Education, Science and Training and Minister for sports and youth in Australia.
In 2011-12, he ran from the North to the South Pole and raised more than AUD 100,000 dollars for Red Cross International’s clean water programs.
In 2014, he ran more than 1300 km in two weeks through the Middle East to raise money and awareness for peace initiatives in the region.