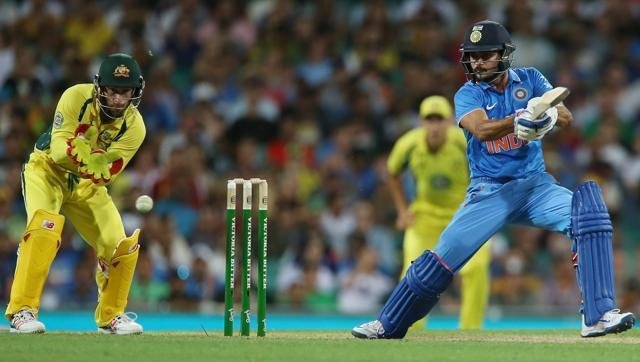 Showing sound temperament, Manish Pandey soaked in the pressure exerted by a ruthless Australia team to lead India to their first win over the yellow and green brigade in the one-day series on Saturday.

Playing only his fourth one-dayer, Pandey lent weight to the India batting line-up to help them cross the line in another keenly contested game at the Sydney Cricket Ground. The platform for the 331-run target was set by openers Shikhar Dhawan (78 off 56 balls) and Rohit Sharma (99 off 108 balls) before the Karnataka batsman carried the team through with a fine unbeaten hundred.

The sense of relief was palpable. It was not just about this tournament, India had broken Australia’s two-year long stranglehold. Their last win in ODIs against the Kangaroos was in November, 2013, at Bengaluru, and across all formats in March, 2014, at the World T20 Cup.

Like in all the four games, it boiled down to the last 10 overs. With the SCG riveted to the action in the middle, the suspense got difficult to bear with each over, with no clue which way the match would swing till the start of the final over.

MS Dhoni had floundered at the Manuka Oval, but he played his trademark waiting game, looking to stay in the match till the end. When the last over began, India needed 13 off six balls. It is easy to see that there has been so much attention to detail in the Australia team’s planning against Dhoni. They hadn’t allowed him any breathing space so far, restricting him to just one boundary hit in a painstaking stay of 40 balls at that point of time.

Dhoni was on strike and Mitchell Marsh had the task of stopping him. Even though he was not middling anything till then, the India captain managed to conjure up the knockout blow, a six off the first ball (the first ball was a wide). He fell trying to repeat the shot, but with six to get, Pandey steered the team home in style by completing his hundred with a four to accomplish the highest chase ever against Australia in Australia.

Living up to the script of the series, it was a batting show all the way, save the early spell in which Australia lost a few quick wickets. First, local hero David Warner treated the 33,000-plus crowd to power-packed strokeplay. Mitchell Marsh took over from the flamboyant opener with a counter-attacking century, as the two helped their team recover from 117 for four to reach 330 for seven.

However, the team management may not be entirely happy with how the two went about getting to the three-figure mark.

Australian selectors loathe seeing their players playing for milestones, and in fact, they have tried to attack the Indians by bringing up the point quite regularly in the course of this tournament.

Saturday’s game provided an example of why they are upset at players putting personal glory over team goals in the way Warner and Marsh slowed down nearing their centuries. Skipper Steve Smith admitted the last two overs proved to be the difference.

As for the visitors, the point of worry was senior bowler Umesh Yadav’s performance. With figures of 8-0-82-1, he hit a new low.