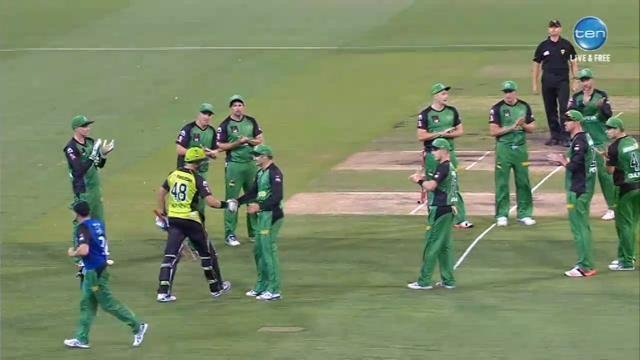 IT was the fairytale ending Mike Hussey richly deserved.

The man lured to Sydney Thunder to turn a walkover into a warrior lifted the Big Bash trophy after his last ever game on Australian soil.

And Mr Cricket had King Khawaja to thank.

Uzzie the emerging superstar — cut from Cricket Australia’s one-day squad in time for Big Bash finals — wrote yet another chapter of heartbreak in the book of the Melbourne Stars.

The Thunder — owner of three wooden spoons and a disastrous 19-game losing streak — suddenly has two glittering bits of silverware, completing the men’s and women’s double on the MCG.

But this time there won’t be any demons for the Stars, bravely beaten after posting a Kevin Pietersen-inspired 9-176.

No ‘what if’s keeping them awake at night, the green team knowing it busted its backside in pursuit of ending its championship curse.

The selection headaches which have plagued the Big Bash will now surely come to a head.

As will calls for DRS to be introduced.

But there was no DRS and no dismissal, with Sydney’s 18 runs plundered from that Zampa over proving critical.

The Thunder was cruising and then it collapsed, falling over the line with just three balls to spare.

Stars captain David Hussey started the rot when he bowled himself for the first time in 16 matches and swiftly did the impossible — dismissing Khawaja on 70.

It added to the romance of the night, him bowling to brother Mike on mum Helen Hussey’s birthday.

When Michael Beer, far from the best fielder, nailed the stumps to send Aiden Blizzard back the Thunder had lost 4-40.

The trophy sat on Ben Rohrer’s bat and in bowler Daniel Worrall’s hands.

Could Worrall emulate Jacques Kallis’s heroics when these teams met on the MCG last month?

Rohrer pinched two from his first and a six from his third to seal it with three wickets and three balls to spare.

New Year’s Eve’s-like fireworks thundered down on the MCG as the Thunder climbed the dais with just its 11th win in franchise history.

It was a fantastic final.

In front of 47,672, Pietersen was finally dismissed for 74 for just his eighth dot ball as his transformation from hated to hero was complete after the Stars batted first for just the second time this summer.

It was all class. World-class, in fact, and his looming absence from England’s T20 World Cup side makes you wonder how hard the Poms actually want to win.

The only blunder Pietersen has made of late was re-signing on Thursday, because after two outstanding knocks in two finals he could have bargained for another $100,000.

The Thunder had never previously made more than 164 batting but its batting line-up had never been so threatening.

Usman Khawaja powered the Thunder to 0-62 after the power play, which included just 10 dots. The Stars went scoreless in 21 power-play deliveries, amassing 1-43.

Usman Khawaja could do no wrong but the same couldn’t be said for umpire Simon Fry. Evan Gulbis had Khawaja plumb lbw on 37 – it was missing leg but cannoning into middle. Time to say yes to DRS.

DavidHussey’s decision to bowl for the first time in 16 games proved an instant hit. He did the impossible – removed Khawaja – ending his Big Bash with an average of 172.5. And Dave even sent a couple down to retiring brother Mike, an unexpected birthday present for mum Helen Hussey.