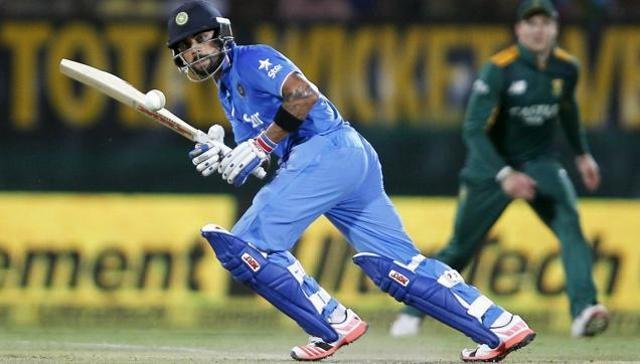 Dhoni is turning out to be a bundle of contradictions. Three days ago he said he can’t take the risk of batting at No 4 because his lower order is not experienced to mount a run chase.

He batted at No 4 on Sunday, leaving Ajinkya Rahane and Suresh Raina to tackle the situation when under the pump. Another call was made, reverting Virat Kohli to his original No 3 slot, pushing Rahane down the order. In the end, his call on shuffling the batting didn’t turn out to be productive.

On a day when India’s bowlers prided themselves on impressive death bowling, the batsmen choked at the death. On a deck with the reputation as the best batting wicket in the country, India bowlers restricted South Africa to a less formidable 270 to left feeling that they had done the job for their batsmen. India, despite some individual brilliance, still fell short by 18 runs in the third ODI.

Rohit Sharma proved Indore was an aberration; he is unmistakably leaving a deep imprint of his class on this series. Despite losing opening partner Shikhar Dhawan, Rohit was effortless as he went after the bowling. He swept, nudged and ran well only for that casualness to emerge again, a return catch to part-timer JP Duminy leaving it in the hands of Dhoni and Kohli.

The two smartest runners between the wickets were quick to pick singles. Kohli was piercing the field with force, whipping deliveries off his leg and dictating the bowling while Dhoni’s slashes matched Kohli’s effort.

However, both gradually slipped into a state of run-coma, with just one boundary coming between the 30th to 40th overs when Kagiso Rabada and Tahir together dried up the runs. Morne Morkel bowled a stingy spell punctuated with back of the length deliveries forcing Dhoni and Kohli to play uppishly.

Dhoni was gone trying to ramp up the scoring. Kohli too scratched around before regaining his attacking mode but by then the run rate had spiralled out of control and India lost wickets and momentum. In the space of 10 runs, Kohli, Raina and Rahane had all fallen to ambitious shots.

The spinners in particular restricted SA to 60 in the last 10 overs. The most dreaded phase for the hosts proved a smooth passage. Only, India realised it still won’t be a cakewalk.