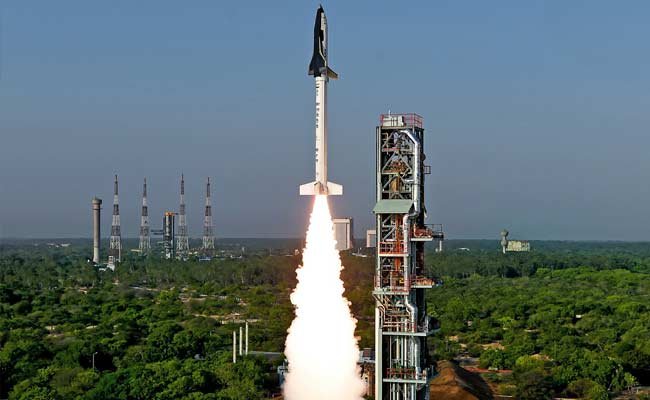 India successfully launched a scale model of a reusable spacecraft on Monday, a project that in time could pit the nation against billionaires Jeff Bezos and Elon Musk in the race to make access to space cheaper and easier.

The winged vessel — one-fifth of full size — blasted off on a rocket from Sriharikota base on the southeastern coast, the Indian Space Research Organisation said. The spacecraft reached an altitude of 65 kilometers (40 miles) and glided back at supersonic speeds for a splashdown in the Bay of Bengal. The test took about 13 minutes.

India put a probe into Mars orbit in 2014 for just $74 million, demonstrating a combination of technological capability and low costs that chimes with the goal of more frequent space travel being championed by Musk’s Space Exploration Technologies Corp. and Bezos’s Blue Origin. Both companies seek to curb costs by making rockets reusable, and are conducting test launches more often.

“While India’s effort is behind the likes of SpaceX and Blue Origin, there are still others further behind and all of the solutions remain to be proven, both technically and from a cost perspective,” said David Wireman, a Dallas-based managing director and aerospace specialist at consultancy AlixPartners. “Although the technical hurdles are quite high, it’s reasonable to believe India can be successful.”

Asia’s No. 3 economy plans to spend about 75 billion rupees ($1.1 billion) on its entire space program in the year through March 2017, a fraction of the yearly $19-billion-dollar budget of the National Aeronautics and Space Administration in the United States.

The reusable space vehicle is supposed to provide a cost-effective and reliable option for operations such as launching satellites, according to the Indian space agency. Mock-ups on government websites resemble the long-defunct NASA space shuttles.

India could in future play a bigger role in the commercial satellite launch market. The global satellite industry brought in $203 billion in revenue in 2014, the latest year for which Satellite Industry Association data are available. Some $5.9 billion of that came from launches.

“Space is no longer a domain that’s dominated by the U.S. and Europe,” said Ajey Lele, a New Delhi-based senior fellow at the Institute for Defence Studies and Analyses. Asian nations are “now making forays,” he said.

India launched its first space rocket in 1963 and its first satellite in 1975. An unmanned mission to the moon that ended in 2009 showed water formation there may be occurring. The Mars probe beat China to the red planet after an almost yearlong voyage.

Modi controls the Department of Space, whose successes give the premier an opportunity to market India as a destination for high-technology investment.

The nation remains about eight years away from a full-scale version of the reusable space vehicle, and still has to cross the hurdle of steering the vessel safely back to land rather than water, according to the Indian space agency.

Musk’s SpaceX in December pulled off a soft, vertical touchdown after the two-stage rocket propelled its payload. Less than month earlier, Bezos sent one of his test rockets to the edge of space and landed it safely back on Earth.

“India has to start somewhere, sometime,” Lele said. “That time is now.”