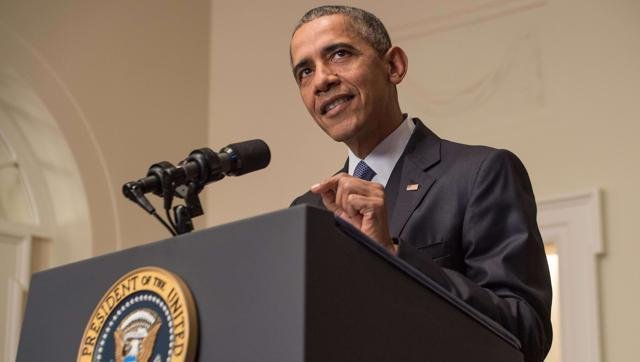 Just a year into office in 2009, President Barack Obama went changing Indian and Chinese delegations during a climate summit in Copenhagen to avoid being shut out, to stay relevant.

Seven years later, Obama did a victory lap on Saturday evening in an White House address claiming leadership of the historic agreement in Paris, calling it “a tribute to American leadership”.

“Over the past seven years, we’ve transformed the United States into the global leader in fighting climate change,” he said, detailing domestic measures and initiatives.

Critical to breaking the impasse that had bedeviled climate talks, he spoke of the “historic joint announcement” with China in 2014 “we showed it was possible to bridge the old divides between developed and developing nations that had stymied global progress for so long”.

That was essentially the start of the crumbing of a coalition of developing countries that wanted the developed world to take larger responsibility for climate change, and do more to mitigate it.

And that was the chief issue over which China and India, the world’s Number 1 and 3 emitters of greenhouse gases, had tried to Obama out calling a secret meeting in Copenhagen in 2009.

Climate became a regular, and often times the key issue, for talks between him and his Indian counterparts — Prime Ministers Manmohan Singh and Narendra Modi.

Bilateral meetings with Xi and Modi on the sidelines of Paris were among the first he did after reaching Paris, and he continued talking to them over phone after returning.

“Obama, Once a Guest, Is Now a Leader in World Talks,” The New York Times said in a heading for an article on the president’s efforts and the journey since Copenhagen.

The Washington Post called the agreement a “big win” for Obama, pointing to the fact that climate change dangers remained a reality still, despite the historic deal.

Obama himself acknowledged that saying “no agreement is perfect, including this one”, but, he added, “make no mistake, the Paris agreement establishes the enduring framework the world needs to solve the climate crisis. It creates the mechanism, the architecture, for us to continually tackle this problem in an effective way”.