One word made the difference: How Paris climate pact was won 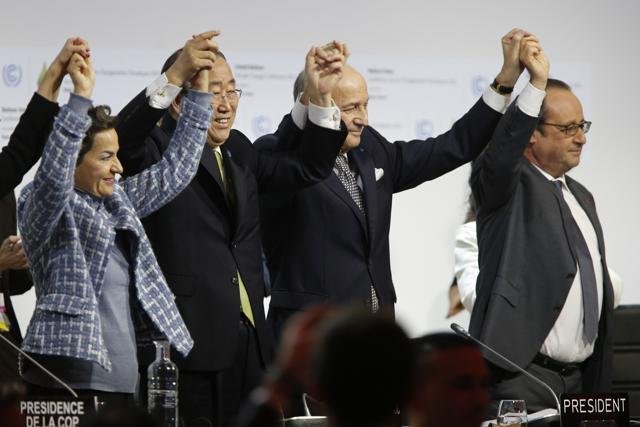 One little word stood in the way of a historic climate accord in Paris for several hours, bringing years of preparations and weeks of negotiations between nearly 200 countries to a screeching halt. A late-night switch of “shall” with “should” in a paragraph of the text paved the way for the deal that offers hope to billions of people across the world against the mounting threat from global warming.

The shall-to-should change made economy-wise emission reduction targets non-obligatory for rich nations, putting them almost at par with the developing world on achieving a zero-emission goal by the turn of the century.

The developments also demonstrated the might of the United States diplomatic machinery that got the word changed, identified as an error by the UN secretariat, to take home a deal exactly the way President Barack Obama had envisaged. The deal commits countries to hold the global average temperature to “well below 2°C” above pre-industrial levels and to “pursue efforts to limit the temperature increase to 1.5°C”.

The first Paris Outcome paper had decisions of the Conference of Parties as an annexure of the Paris agreement, making the COP decisions binding.

The US had from beginning opposed a fully legally binding agreement. So, something was required to be done to get the US on board after it walked out of the only other climate treaty, the Kyoto Protocol.

The paper was turned upside down with the agreement becoming an annexure to the COP decisions. This meant that while the accord was binding it could be easily altered through COP resolutions, which were no more obligatory. Also, the most critical targets of the Paris Outcome, from $100 billion as the finance floor, are in the COP decisions but not in the agreement.

Backroom renegotiations led by Obama, who personally called up heads of governments of India, China, Brazil and South Africa, ensured that all countries were in agreement. The US also cobbled together a last-minute high ambition coalition of over 100 rich and most-vulnerable nations, pushing India and China to near isolation.

If many at Le Bourget commune, the venue for the talks, are to be believed, the concept of the pact was prepared by the French president’s office with the US delegation having a battery of top experts on international law. It was later discussed at the Indaba (Zulu word for “meeting of elders”) headed by French foreign minister Laurent Fabius with ministers from 196 nations.

As the discussions went on, senior members of the US delegation led by secretary of state John Kerry rushed to representatives of one country after another to get agreement on every point they wanted. “In fact, they had a draft on which discussions with us was conducted. We were surprised but it addressed all our issues,” said a negotiator from a developing country.

An hour before the final Paris agreement was tabled, the US team was in the Indian office, explaining the rationale behind getting “shall” in Article 4 of the agreement altered to “should”.

The change meant that the burden on rich nations to reduce emissions would be non-obligatory like the developing world, diluting the firewall between the two.

While the French got all the applause for the Paris agreement, the US showed real brinksmanship to get an agreement of its choosing. The rest had no option but to fall in line.