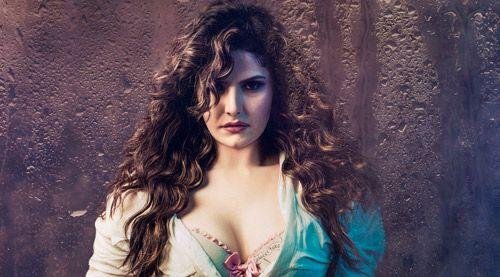 Just a couple of days remain for the release of Hate Story 3 and for Zareen Khan; it is going to be a big moment indeed. For someone who started off with a biggie Veer, had a superhit to her name in Housefull 2, enjoyed a chartbuster item number with Salman Khan in ‘Character Dheela’ [Ready] and then scored well in Punjabi films too opposite the local star Gippy Grewal [Jatt James Bond], it has been a matter of quality over quantity for her.

No wonder, even though she is returning to a Hindi film three years after Housefull 2 [2012], Zareen isn’t carrying any regrets whatsoever.

What loomed large over her mind was to pick up one such film that wiped away the (unnecessary) criticism that came her away post her debut release Veer.

“There was so much criticism that came my way and I used to wonder what I had done,” Zareen brings on a broad smile here, “I knew I was on the right track but then I had to be careful about what I picked now. I didn’t want to go through the grill all over again. Even with the five films that I have done, I wanted to be remembered. So yes, I have been choosy and that has been a conscious call.”

Stepping into a franchise affair like Hate Story 3 meant that she wanted to be involved in everything that eventually came on screen.

“There is certain perception that this genre carries but the fact remains that as an actor, there was a lot of preparation that was required for the part,” says Zareen, “Other than being the body beautiful, it was also about getting the many layers of the characterization right. We had quite a few sittings together. We did many narrations. And yes, as for the look and physique, I had to look my best and be in a perfect shape. That is a pretty delicate zone and I couldn’t err there.”

Meanwhile, she also had Daisy Shah for company who too was in the process of shedding her inhibitions in the post Jai Ho days and stepping up the glam quotient.

“Well, I am happy that I shared this film with Daisy. I had met her a couple of times before we started shooting together for the film, though I hadn’t interacted with her much before that on a one to one basis. Hate Story 3 gave us both an opportunity to know each other better,” says Zareen in a measured tone.

As for the outcome on the big screen, there isn’t much time remaining as the results would be out in a matter of few hours. Guess Zareen and her partner-in-crime Daisy would indeed have a lot more to bring on display that being an eye-candy.

- Advertisement -
Share
Facebook
Twitter
Pinterest
WhatsApp
Previous articleNo articles are written when teams get all out under 50 in SA: Kohli
Next article“Rock On 2 is a salute to the persecuted people of the North East” – Farhan Akhtar