No articles are written when teams get all out under 50 in SA: Kohli 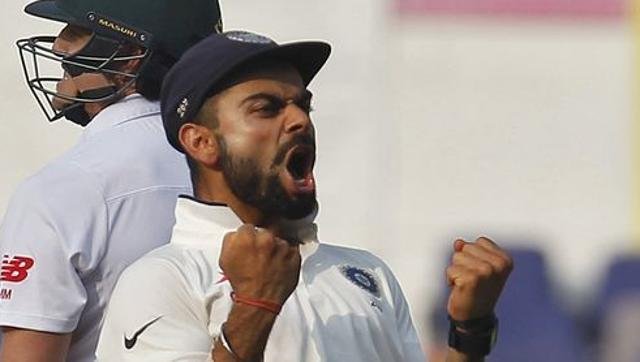 India’s Test captain Virat Kohli had been quite vocal about his views on the Nagpur pitch and on Wednesday, he again expressed his disappointment at the ICC, which rated the Nagpur track as “poor”, and wondered why nothing is written when teams get out for under 50-100 runs on South African pitches.

India won the series with a crushing 124-run win at Nagpur, a match that ended in two and half days, prompting ICC match referee Jeff Crowe to file a report terming the pitch as not suitable for international cricket. BCCI has been asked to reply within 14 days.

Kohli came down heavily on the media reports on pitches.

“Well, there have been three scores of under 50 runs (in an innings) in South Africa but I haven’t seen any sort of articles on that. Teams have been bundled out under 100 for about six times in South Africa. Never saw any articles written on that. See articles are there to be written. It’s a mindset or an opinion of someone. I don’t relate to it, I don’t understand it and I don’t entertain it. It doesn’t bother me or the team,” Kohli shot back on media reports.

“People can write their opinion on as and how they wish. We are doing best what we are suppose to do,” he added.

But when the journalist in question reiterated that it’s an official ICC report, Kohli maintained his attacking stance.

“Yes, I am talking about anyone (including ICC). I am not only talking about people writing articles in general. It’s an assessment that happens in every condition and at every ground. Unfortunately, the situation in our country is highlighted a bit too much and that’s a fact. Because only thing we talk about is the pitch and when we were in South Africa, the only thing we talked about is how badly we played,” insisted Kohli.

“It’s been going on for a while. We are changing our mindset but people around us hasn’t changed. We are criticised for our techniques but when visitors don’t play well, it’s always the wicket,” Kohli said, and the sarcasm was not lost on anyone.

“I don’t want to say much about the pitch as lot has been said about it. It’s better if we talk about the positives. Because when the team wins, you should get support from every corner. We always try to find points to criticise people, but we should give confidence to people. That’s why this is something which I don’t find logical, that everyone is commenting on the pitch,” he said.

The ‘Pink Ball’ Test in Adelaide also came up for mention as Kohli said, “I don’t think anyone has written an article about Adelaide Test which finished in two and half days. So I don’t see anything wrong in our pitches.”

- Advertisement -
Share
Facebook
Twitter
Pinterest
WhatsApp
Previous articleToo much TV really DOES rot the brain: Three hours or more in front of the box each day as a teenager leads to poor brain power in middle-age
Next article“I can’t be there just as an eye-candy or a showpiece” – Zareen Khan on choosing Hate Story 3
- Advertisement -