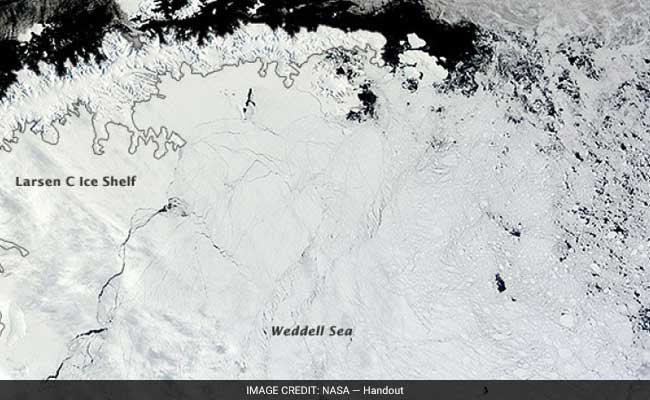 For some time, scientists who focus on Antarctica have been watching the progression of a large crack in one of the world’s great ice shelves – Larsen C, the most northern major ice shelf of the Antarctic peninsula, and the fourth largest Antarctic ice shelf overall.

Larsen C, according to the British Antarctic Survey, is “slightly smaller than Scotland.” It’s called an ice “shelf” because the entirety of this country-sized area is covered by 350 meter thick ice that is floating on top of deep ocean waters.

The crack in Larsen C grew around 30 kilometers (18.6 miles) in length between 2011 and 2015. And as it grew, also became wider – by 2015, yawning some 200 meters in length. Since then, growth has only continued – and now, a team of researchers monitoring Larsen C say that with the intense winter polar night over Antarctica coming to an end, they’ve been able to catch of glimpse of what happened to the crack during the time when it could not be observed by satellite.
The result was astonishing.

The rift had grown another 22 kilometers (13.67 miles) since it was last observed in March 2016, and has widened to about 350 meters, report researchers from Project MIDAS, a British Antarctic Survey funded collaboration of researchers from Swansea and Aberystwyth Universities in Wales, and other institutions. The full length of the rift is now 130 km, or over 80 miles.

What this means is that it may be only a matter of time before we see the loss of an enormous chunk of Larsen C – an historic event that would bring to mind the losses of the Larsen A ice shelf in 1995 and the sudden breakup of Larsen B in 2002.

When that last event happened, the National Snow and Ice Data Center remarked that the Earth had lost a major feature that had “likely existed since the end of the last major glaciation 12,000 years ago.”

“We previously showed that this will remove between nine and twelve percent of the ice shelf area and leave the ice front at its most retreated position ever,” write Adrian Luckman, Daniela Jansen, Martin O’Leary and members of the Project MIDAS team.

“The trajectory of the rift now implies that the higher of these two estimates is more likely.”

The amount of ice that could be lost would be around 6,000 square kilometers, or 2,316 square miles – nearly the size of Delaware, said O’Leary, a glaciologist at Swansea University and one of the team’s members, by email.

“It’s hard to tell how soon it could break – we really don’t have a good handle on the processes which control the timing of the crack propagation,” O’Leary said. “It’s a lot like predicting an earthquake – exact timings are hard to come by. Probably not tomorrow, probably not more than a few years.”

So in sum, we’re talking about a possible ice island in the Southern Ocean that is as large as one of the smallest U.S. states. Moreover, researchers studying the widening crack in a 2015 paper – many of whom overlap with the MIDAS team – predict that after the loss of this ice, the remaining shelf could be unstable and continue to lose more mass.

“If this will calve off in the next, say two orthree years, the calving front will be retreated very far back, further than we’ve seen it since we were able to monitor this,” says Daniela Jansen, a researcher with the Alfred Wegener Institute Helmholtz Centre for Polar and Marine Research in Germany.

“And our theory in this paper was basically that the calving front might become unstable. Once the iceberg has calved off completely, there might be a tendency for the ice front to crumble backwards.” That could be further enhanced, she said, if warmer air temperatures cause the formation of large numbers of meltwater lakes atop the shelf.

The fear is that something could then happen with Larsen C analogous to the loss of the smaller Larsen B ice shelf, which proceeded slowly – at least until it didn’t.

In the 1980s, said Jansen, the Larsen B ice shelf underwent a large iceberg calving event much like what’s expected in the coming years at Larsen C, setting off a series of similar episodes until eventually the whole shelf disappeared.

“That took a while, but we think it might actually happen here as well,” Jansen said.

This is what the Larsen B ice shelf looked like right after it shattered in 2002:

The Larsen C ice shelf is the fourth largest in Antarctica, but all of the continent’s shelves pale in comparison to the Ross and Ronne-Filchner ice shelves, each of which is over 400,000 square kilometers in area.

When ice shelves lose large chunks, it does not raise sea level because these bodies are already afloat. However, the loss of an ice shelf can speed up the seaward flow of the non-floating glacial ice behind it, and this ice can in turn contribute to sea-level rise. Researchers have estimated that the loss of all the ice that the Larsen C ice shelf currently holds back would raise global sea levels by 10 centimeters, or just under 4 inches.

Granted, there is at least an argument to be made that even a large loss of ice from Larsen C would not be immediately bad news for the global sea level. A study earlier this year in Nature Climate Change looked at ice shelves around Antarctica to determine how much area they could lose without ceasing to form their crucial function of buttressing glaciers and holding them in back, and found that Larsen C actually has a lot of “passive” ice that it can lose without major consequences.

The MIDAS researchers, though, think the consequences could be considerably more severe. If the crack continues on its current pace, we may soon learn who is correct.

While the major worry outside of Antarctica is sea-level rise from the glaciers behind Larsen C, “it will also be a shame if the Larsen C ice shelf disappears as well,” said Jansen. “I have spent so much time now looking at the satellite images, and I really love this ice shelf, it would be such a tragic thing to see this thing go.”