He is known for breaking records, but in his words, Diljit Dosanjh would rather be known for “winning hearts” because “that’s what my name means!” From becoming a household name with Punjabi movies – like Jatt & Juliet, Punjab 1984, Sardaarji 1&2 and Super Singh – to finally getting recognition in Hindi cinema – with short stints in Udta Punjab & Phillauri – Diljit has finally grabbed a mouthful of sky with his latest release, Soorma.
A huge star in Punjab, the singer-actor released his first single, Ishq Da Uda Ada way back in 2004, entering mainstream Punjabi movies with The Lion of Punjab in 2011. Now, fourteen years after this lanky dude from a village near Ludhiana made his debut, he declares he would “rather be associated with interesting projects than chase money”.
Today, Dosanjh stands out not only as a musician and superstar from Punjab, but also as the only turbaned Sikh who has played a hero in Hindi films. Here are some excerpts from a chat over DD’s favourite khade chammach wali cha… 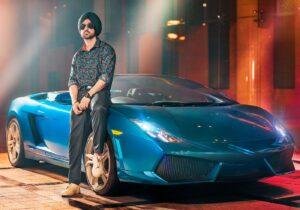 On Music & More…
DD: I never had any hunger to be a playback singer in Hindi films and have never asked for a song to be made for me as an actor or even as a singer. Music is pure. Music is my life. It is not just a job for me. Music is the reason that brought me to films. They say the universe is made up of sound. First come the words and then the tune, the music. If music is not spiritual, it will never touch hearts…kadi vi ‘diljit’ nahi houga. (It will never win hearts).
The Shy Boy-Next-Door
DD: I come from a small town. I am shaky around women. You know, when we were shooting for Udta Punjab, main subah uthta kehke, ‘uth mama aaj Kareena nal kaam karna hai (I used to tell myself in the morning, ‘Wake up, today you’ve to work with Kareena’). But men don’t intimidate me, kudiyon naal thoda sa ho jata hai kyunki ek toh padhiya likhya, doosra mai jidher padhiyan udhar munde hi munde (I get conscious with women, because where I studied, there were only men, no women). I have never interacted with girls much. 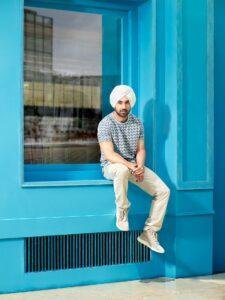 Bollywood Dreams
DD: I am not earning a lot of money in Bollywood. I am earning more by doing shows and Punjabi films than Hindi films. I need to establish myself in Bollywood but I don’t want to be chasing after money. I am experimenting with films and roles here. Last year in Bollywood, I said no to more films than yes. The reason for this was that though the films were good, my part was a character role and it was not that important (to the story). If I don’t like anything I decline it. I can only play characters I connect to. Mujhe business man banne ko bol de koi, mai nahi kar sakta kyunki maine aisi life jee nahi hai (If someone asks me to play a business man, I can’t because I’ve never lived like one). I have a career in music if I don’t do anything I will do music. I have never followed a strategy in my professional life. I have always gone with the flow.
Future Plans
DD: I am open to any good Hindi movie as long as it offers me a scope to act. I am doing Arjun Patiala and one more film. I like to do one Punjabi film every year, but that has not happened so far this year. Between music and films, I cannot decide—music is my own thing, so if a friend offers me a good movie, I can always keep it aside for a while. 60 ka hoke main amrit chakhunga, and work in Hollywood films. English bhi seekh lunga tab tak. Ye meri last tamanna hai, uske baad utha le bhagwaan (By the time I’m 60, I want to work in Hollywood films. Hopefully, I will also learn some English by then. That is my last wish!)

Previous articlePower Play: The Role of Sci-Tech In Sports
Next article15th Pravasi Bhartiya Divas To Be Held In Varansi
Aarti Kapur Singhhttp://theindiantelegraph.com.au