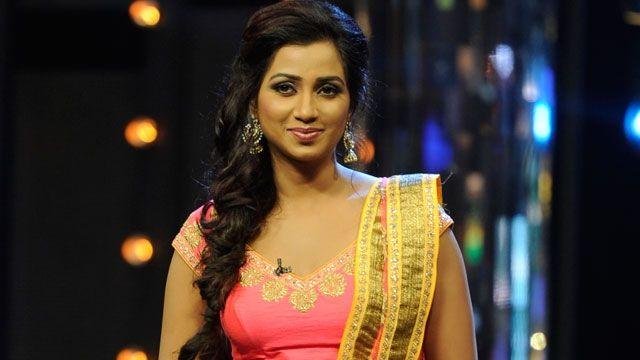 She came here thrice and on each occasion it was packed overflowing houses. Now I hear that Shreya is making a fourth visit to Australia in all in four years and there is commotion in the air about this super show ‘DEEWANI MASTANI’ scheduled on 21 August 2016 at Sydney Olympics Park Sports Centre.

She is a singer of the top echelon and has the appreciation and love showered by masses of music lovers, the world over during her short reign as the supreme enchantress of the Bollywood scene.

” Piu’’ (Shreya Ghoshal’s pet name) is a phenomenon currently sitting pretty high up on the coveted musical pedestal with none in the vicinity to threaten to dislodge her from her high perch. Her arrival to the musical scene was brisk and quiet and she became an overnight sensation. The undisputed   Nightingale Lataji ruled the roost for many decades, and the one who occupied the throne vacated by her was not a mean act musically.

Mangeshkar departed and Ghoshal slipped in. Her success was such that she won; 4 National awards, 6 Film Fare statutes, 9F Fare south India awards, 7 IFFAs, 7 Zee cinema awards, 3 Mirchi Music Awards, 4 Guild Awards and 4 Kerala State Film Awards and many other gongs, against formidable oppositions, all these happened between 2003 and 2016.

Shreya is a Bengali girl, from Rawat Bhata, Kota, of Rajasthan. Academically she has achieved well.  She was born on March 12, 1984, and the credit for spotting her goes to Sa Re Ga Ma Pa, music context organizers with fame. Later encouraged by Kalyanji (Music Director) and Film Director S.L. Bhansali, her progress to stardom was meteoric and in a haste. Her musical career made a vertical take off and it goes up merrily on. Since her maiden effort in Devadas, in rapid succession she snared the highly coveted Film Fare Award and R.D. Burman’s ‘Newly emerged talent’ award (year 2003) for her maiden film venture, Devdas. Her voice blended to the persona of screen Goddess Aishwarya Rai who was the heroine in Devadas.  To top it all in 2003 she won the National Award for the song ‘Bairi Piya’, over all a good Trifecta.

A highly melodious voice; ability to negotiate at any scale, her uncanny ability to sing in multitude of diverse hard to master textured Indian languages makes her successful. With her perfect language diction and flawless intonation capacity with which she blends well with the characteristic theme and style of the song success comes along.  As a Malayalee I can vouch her impeccable pronunciation, unheard of even among Kerala born singers. Shreya told me in an interview that she goes to great length to learn the pronunciation of words to perfection, as well as tries to understand the characteristics of the language culture and blends them all with her singing acumen.  ‘Swara madhuryam (sweetness of sound) ‘Laya gnanam” (sense of timing) and ‘gana alapana parijnanam’ (singing ability) in right ratio makes one a great singer. Shreya is a true example of that notion.

Philosophical in her conversations she thinks God shows the path she has to tread. She says “I meekly do so”.  Many things happen because of destiny, like she was born in a musical family; her home was always a hub of musical activities. She thinks she is a “culture curry”. She did not say why so?

Everyone has an inbuilt favouritism streak in him and her. Shreya too has favourites!  ‘Shreya’s ‘favourites’; favourite screen heroes (Guru Dutt and Madhuri Dixit), Favourite food (Mum’s fish curry and rice), favourite holiday spot (Mauritius), favourite perfume (David Off), Favourite car (Not keen on cars still it has to be Porsche ‘Cayenne’ GTS Edition 3,2010, or its latest version. Good choices Shreya.

She is far ahead among the pack of the current professional singers, and to me she will be there for a long innings God willing.