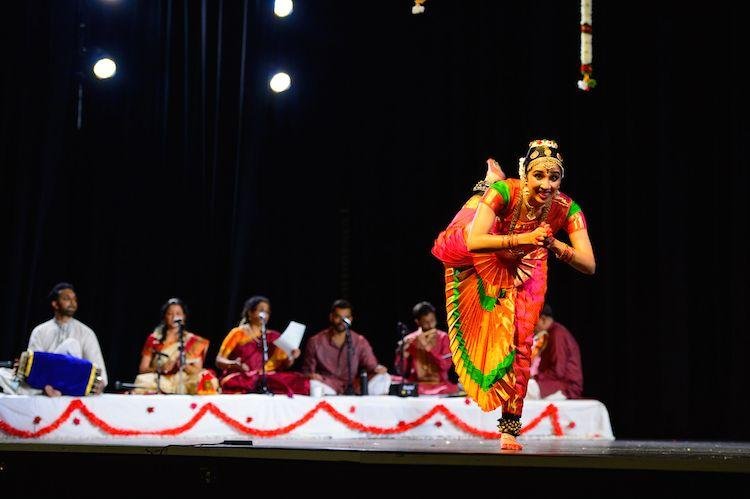 “This art is not entertainment but it is a Samarpanam. It is a Natya Yoga “said Mrs Bhuvana Venkatraman “speaking on the occasion of the Bharatanatyam “Arangteram” (debut performance) of Vaanie Krishnan held on 9th July at the Science Theatre, University of New South Wales. “the traditional Bharatanatyam dance art is a gift from India to the world. It requires lot of devotion and practice such as demonstrated by Vaanie Krishnan with her balanced movements and creative depiction of Karna (the unsung hero of Mahabaratha)” said Mrs Bhuvana Venkatarman.  The repeated applauses to her speech echoed the feelings of the huge audience at the Science Theatre totally captivated throughout nearly four hours of delightful “Arangetram” performance by Vaanie Krishnan.

The classical Bharatanatyam dance form consists of three main elements: BHA- Bhava, or expression; RA- Ragam, or melody; THA- Thalam, or rhythm; NATYAM means dance. Traditionally, the Arangetram signifies the first time that a dancer “ascends the stage” as a solo artiste for a full-length performance of a full repertoire of dances ranging opening dance to Thillana (the grand finale).

Vaanie Krishnan made a grand entrance with a Repertoire   Ganesha Kauthuvam in Ragam Naattai and set to Adhi Thalam composed by Tanjore Quartet.  Kauthuvams are one of the first compositions learnt by a dancer. This was followed by a delightful Jathiswaram in Ragam Kanada and set to Roopakam Thalam composed by the eminent dance guru K.N.Dhandayudapani Pillai. Vaanie with her swift footwork was at ease performing this item and versatile in rhythm with the musicians.

Vaanie Krishnan then performed with a command of a most difficult item Varnam in Ragam  Neelambari set to Adhi Thalam composed by maestro Lalgudi G Jayaraman. In this piece Vaanie effectively portrayed the heroine (Valli) awaiting the arrival of Lord Muruga, as everything reminded her of Him, she pined for Him.  The maturity her performance gave such an impression to the thrilled audience that they were watching a professional dance performance and not an “Arangetram”! Also it was noted that this Varnam was novel, modern and very well-choreographed.

After a brief intermission, Vaanie resumed with a beautiful padam item Ardhanareeshwara Sthothram in Ragam Brindavana sarangi set to Adhi Thalam composed by Adi Shankaracharya. The Vaanie skilfully depicted Shiva and Shakthi as half man and half woman respectively and with the right side portraying the masculine power of Shiva and the left side representing Parvathi the personification of feminine strength and grace.

The most applauded item of the evening was Suryaputra Karnan with music composed by T.M. Mahadevan, grandfather of Vaanie Krishnan.

This was a creative item by Vaanie Krishnan depicting the Mahabharata story of Kunti and her son Karna. Heart wrenched Kunti approaching Karna revealing herself as his mother and asking Karna not to kill her sons. Karna who cannot say no to any one promises reluctantly.  This was a game of Krishna. Karna falls to his death. Kunti is devastated.  The item was also consisting of demonstration of poetic lines written by Vaanie Krishnan in English and Kunti saying to Karna such as:

“Like a pearl lost deep in the ocean; Like a blossoming flower hidden in the woods. So you were to me – It was I who introduced you to this world “. Such an introduction of Karna in the art of spoken words was very well received by the audience. In this item Vaanie superbly portrayed a gamut of emotions and expressions ranging from surprise, confusion, anxiety, fear, mischief, valour, love and loss.

Vaanie then continued with another delightful number Brindavana Nilaye in Ragam    Reethigowlai and set to Adhi Thalam composed by Oothukkaddu Venkata Kavi. This item describes Radha the love and life of Lord. This was followed by Kanchadhalaya Dhakshi Kamakshi in Ragam   Kamala Manohari and Adhi Thalam describing Goddess Kamakshi her beauty and grace.

Vaanie concluded her performance with an enchanting Thillana in Ragam Madhuvanti    and Adhi Thalam to the composition of Lalgudi G Jayaraman.  The audience particularly enjoyed the Arudhi in the Thillana item.

All the items chosen for the repertoire have been painstakingly selected to provide opportunities for the dancer and in doing so the dancer’s ability to engage and keep the audience engaged was very important .  Vaanie Krishnan simply achieved all these with so much of dedication, planning and delivery of her Arangetram, a very cherishing event.

Vaanie’s Guru Padma Balakumar is a renowned dancer, artistic director and founder of the ‘Nrityagriha School of Indian Classical Dance established in 1989. Her dedication and passion for dance is unsurpassed which she has effortlessly been passing to all her students. Padma Kumar was elated about the “Arangetram” of Vaanie Krishnan, her student of ten years. Padma Kumar said” Vaanie was very focussed, dedicated, creative as evident from the Karna item and developed her skills from her strengths and improving where required”. The highly successful Arangetram event was very well supported on Nattuvangam & Choreography by   Guru Padma Balakumar with very talented musicians such as vocalists Prema Ananda Krishnan, Sanjay Ramaswamy, Janakan Suthanthiraraj on Mridangam, Balaji Jagannathan on violin and Venkhatesh Sritharan on flute.

It was a proud and memorable day not only for Vaanie but also her humble parents Sumathi Krishnan (of Sydhwaney fame) and Krishnan.  Vaanie Krishnan thanked her family for their input, support and commitment to making her goals a reality, specifically her grandfather for his creative composition on the Karna piece.  Vaanie thanking the audience said” by being here today you are not only supporting me but you are giving importance to art and the way it can teach us about ourselves and each other”

While Arangetram is important in this country, the child totally born and brought up here to relate to our traditional myths, to understand philosophies to internalise and emote is not easy thing. The INDIAN TELEGRAPH congratulates Vaanie Krishnan and her guru Padma Balakumar of Nrityagraha setting a new model of creative Arangetram in Multicultural Australia.