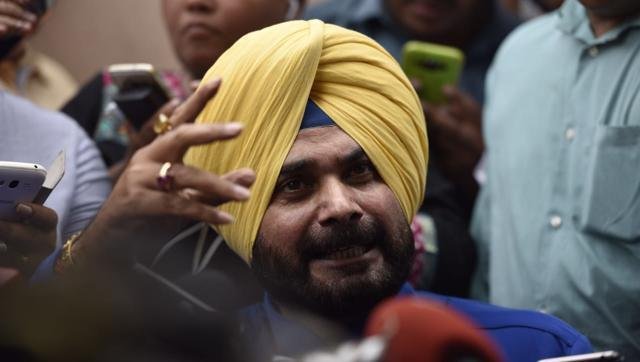 Cricketer-turned-politician Navjot Singh Sidhu said on Monday he quit the Rajya Sabha because he was asked to stay away from Punjab, but refused to clarify if he was still with the BJP or joining the Aam Aadmi Party (AAP) as speculated.

The 52-year-old, now a cricket commentator and fixture at television comedy shows, recited quick-witted couplets at a media briefing to underscore how his party held him a “sinner” without assigning a reason.

The BJP’s three-time MP for Amritsar said he delivered the prestigious seat to the party in adverse circumstances, but was “drowned in the Modi wave” in the 2014 Lok Sabha polls, when he was asked to shift from the constituency.

“When storms were blowing, then Navjot Singh Sidhu was sent … Now, when there was a wave in support of Modi sahab, I was drowned along with rivals,” he lamented, recalling how he contested polls in 2004 on then Prime Minister Atal Bihari Vajpayee’s request, and won with more than 100,000 votes to spare.

“I was told to fight election from Kurukshetra, then west Delhi. I said no, I won’t betray my people.”

The former Test cricketer quit as parliamentarian on the first day of the monsoon session on July 18, only a few months after he was nominated to the Rajya Sabha. His relations with the BJP had soured since the 2014 polls.

Sidhu said Punjab’s interests were paramount, but as he couldn’t have done much as a Rajya Sabha MP, the seat had become a “burden” for him.

“Rashtra dharma (duty towards the nation) is the most superior. How can Navjot Singh Sidhu stay away from his motherland,” he said at the press conference in New Delhi, his first after quitting the Rajya Sabha. “No party in this world is above or greater than Punjab … If it comes to choosing between my family, my party and Punjab, I will choose Punjab a hundred times.”

His resignation set off furious speculation that Sidhu was headed for the AAP, which is positioning itself as the third alterative in Punjab that is due for polls in early 2017.

But the former cricketer kept up the suspense on Monday. He didn’t answer questions about his plans, if any, for the AAP, or him continuing in the BJP.

Delhi chief minister and AAP chief Arvind Kejriwal had lauded Sidhu’s move, saying it was a courageous decision. After Sidhu’s revelations on Monday, Kejriwal said the former cricketer was kept out because he would have spoken against the drugs scourge in Punjab, a grave issue that the AAP has transformed into a political plank.

“Sidhu wud hv spoken against drugs, if he went to Punjab. BJP prevented him. Who was BJP trying to protect? Shocking (sic),” he tweeted.

It was alleged that Sidhu was “wronged” at the behest of the Shiromani Akali Dal, the BJP’s coalition partner. Punjab Congress unit president Captian Amarinder Singh said as much. “It has vindicated our stand that the Akalis and BJP are partners in sins … and perhaps they were apprehensive that he might expose them. So they barred and gagged him.”

The BJP, however, doesn’t seem to have given up on the maverick leader. Sidhu was still with the BJP and “he has not resigned from the party”, party’s Punjab chief Vijay Sampla said in Chandigarh on Sunday.