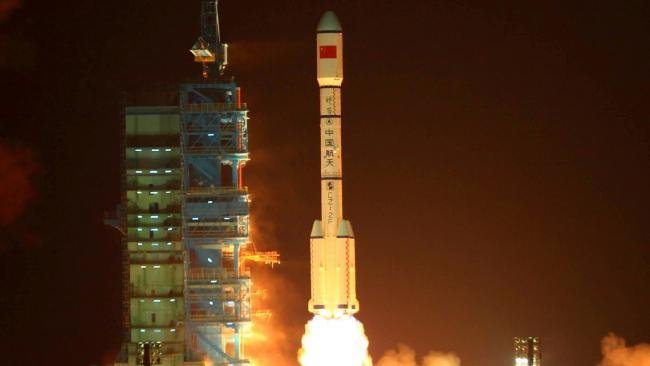 CHINA has lost control of its giant space station — raising fears it could cause devastation when it crashes.

The Sun reports that the 8.5-tonne Tiangong-1 is expected to plummet to Earth next year after its launch back in 2011.

But space boffins at Harvard University revealed their fears that China has lost control of the station and it could crash anywhere.

The station will reduce significantly in size as the Earth’s atmosphere burns it up.
A spokesperson at China’s space agency said: “Based on our calculation and analysis, most parts of the space lab will burn up during falling.”
But a huge clump of metal could still rain down on unwitting victims.
“There will be lumps of about 100kg or so, still enough to give you a nasty wallop if it hit you,” he said. “Yes there’s a chance it will do damage, it might take out someone’s car, there will be a rain of a few pieces of metal, it might go through someone’s roof, like if a flap fell off a plane, but it is not widespread damage.”

The country’s second space lab, the Tiangong-2 — or Heavenly Palace-2 — blasted off on Thursday night from the Gobi desert and is expected to operate for at least two years, the latest stage of the Asia’s giant’s ambitious space program.

The Chinese space station will weigh over 60 tonnes — much smaller than the 420-tonne International Space Station.

It will normally accommodate three astronauts at a time but has a maximum capacity of six, it added.

China is pouring billions into its space program and working to catch up with the US and Europe.

Beijing sees its military-run space program as symbolising the country’s progress and a marker of its rising global stature.

As well as building a space station, it intends to eventually put one of its citizens on the surface of the moon.

It announced in April it aims to send a spacecraft “around 2020” to orbit Mars, land and deploy a rover to explore the surface.