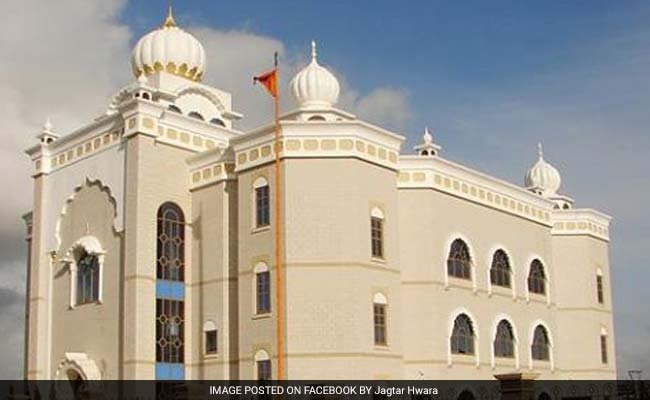 LONDON:  British police arrested 55 people and seized their kirpan, a ceremonial Sikh dagger, at a Gurdwara on Sunday, following a protest against a mixed marriage.

Armed officers were deployed to the Gurdwara in Leamington Spa, central England early on Sunday after a group of men entered the building.

A total of 55 people were arrested for aggravated trespass in what police chief David Gardner described as “an escalation of a local dispute”.

Not familiar about the Kirpan being part of the Sikh attire, the police chief said: “A significant number of bladed weapons were seized from the scene,” adding that no-one was injured in the incident.

Gurmel Singh, secretary general of Sikh Council UK, said protesters walked freely into the Gurdwara and did not break into the building. He said the group then held prayers and a sit-in to oppose a wedding due to take place between a Sikh and a non-Sikh.

“Marriage is a sacred institution and in our culture we have no problem with people of different races getting married, but the religious doctrine says this particular ceremony is reserved for two Sikhs,” Mr Singh told news agency AFP.

One eyewitness, Perry Phillips, said the protest appeared to be peaceful. “I could see at the entrance to the Gurdwara that a lot of people were outside but it was peaceful, there was no shouting or anything,” he told the Press Association.

“There’s a big Sikh community in Leamington Spa and a lot of people were turning up,” he added.

The ‘Sikh 2 Inspire’ group said those arrested were carrying the kirpan, a ceremonial Sikh dagger, and criticised the response to the Gurdwara incident.

“The media and police have victimised the Sikh appearance and defamed the Sikh community in the UK,” the group said on Facebook, calling on their supporters to take their kirpan to their local police station and explain its significance to officers.

There are more than 420,000 Sikhs in England and Wales, according to the 2011 census data, accounting for 0.8 percent of the population.

Christians make up the largest religious group, accounting for 59.3 percent of the population, followed by Muslims (4.8 percent) and Hindus (1.5 percent).