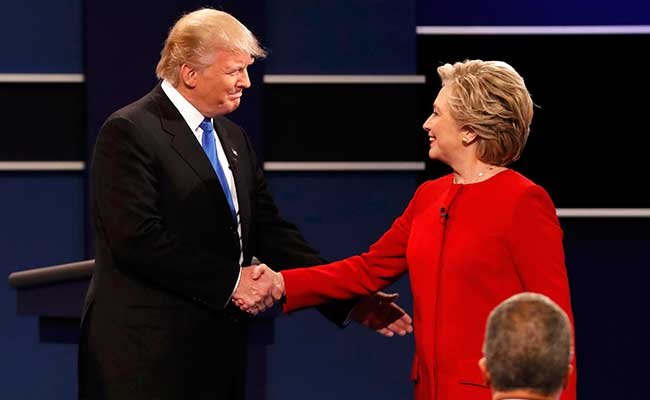 The figure includes the approximately 45 million who watched the 90-minute debate on the four main TV networks, as well as millions more who watched cable channels, CNN, MSNBC, Fox News and other smaller outlets, CNN said.

If confirmed, the audience, due to be finalised later on Tuesday, beat the 80.6 million record set by the Jimmy Carter-Ronald Reagan TV presidential debate in 1980 but fell short of the 100 million viewers some analysts had predicted for the face-off.

CNN said final numbers were being tallied by Nielsen, which measures television audience size. Viewership remained high throughout and, according to early Nielsen data, there was not a big drop-off after the first hour of the debate, CNN said.

TV technology company Samba, which tallies data from chips embedded in smart TVs and other devices, said the audience it measured watching on BET and Hispanic language outlets Univision and Telemundo dropped by half about 45 minutes into the debate.

Monday’s figures did not include millions of people who watched the encounter online through Twitter, Facebook and other social media, including in large groups in bars and restaurants.

Monday’s debate was the first of three between the presidential candidates before the Nov. 8 election. The other two are on Oct. 9 and 19.

Fox News Channel grabbed the biggest cable audience with an average 11.4 million viewers, the early Nielsen data showed. NBC, whose “Nightly News” anchor Lester Holt moderated the contentious exchanges about race, the economy and national security, was first overall with an estimated audience of 18.2 million.
TV networks had hyped the debates for days beforehand and reported strong demand compared to four years ago for commercial time during pre- and post-debate programming. Ad rates were far higher than for typical news programming.

CNN charged more than $55,000 for 30-second ad spots as part of packages ranging from $800,000 to $1 million that included future debates and election night, according to a person with knowledge of the matter.

Both CNN and CBS have limited availability left for the next debate on Oct. 9, the sources said.

“Clearly the debate did really well last night,” said Michael Law, managing director of video investments at Dentsu Aegis Network.
Law said he did not expect ad rates for the next debate would rise significantly based on Monday night’s audience. The Oct. 9 face-off airs against an NFL matchup of two popular teams – the Green Bay Packers and New York Giants.

“The NFL will likely do well on that night, but will probably see some fall-off during the 90 minutes of debate,” Law said.