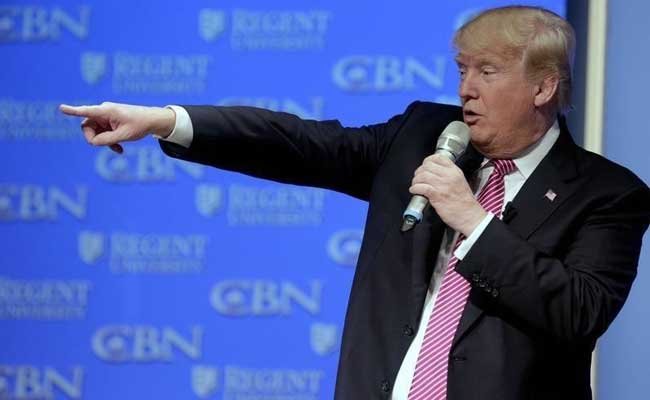 Columbia:  Donald Trump, the controversial Republican presidential front-runner, today again blamed India for taking away jobs from Americans, pledging to bring them back if elected president even as the ‘Trump mania’ appeared to have picked up in the US ahead of “Super Tuesday” showdown.

The 69-year-old real estate tycoon who became a politician only last summer has been drawing thousands of crowd across the country, hoped to “seal the deal”, coming Tuesday by winning Republican primary in all the 11 states.

Addressing a crowd of around 5,000 people inside the hanger of a local airport in Columbia, Trump sold the dream of “making America great again” by promising to bring back jobs from countries like India, China, Japan and Mexico, building the wall on US-Mexico border, “knocking the hell out ISIS”, and repealing and replacing Obama care.

Every promise of his drew a thunderous applause with people cheering “USA, USA” and “Trump, Trump”.

People lapped on to every word he said from the makeshift stage with his Trump plane in the background.

Trump had earlier added India to the list of countries that he believes is taking away jobs from the US.

Trump has been regularly singling out China, Japan and Mexico and occasionally Vietnam for taking away American jobs.

Rishu Patel, a Grade 7 student here said, “(Trump) will make us safe”. Rishu and his father Jitu Patel were probably the only Indian-Americans at the rally.

Tennessee has around 25,000 Indian-Americans, majority of them living around Nashville and Memphis, which has one of the oldest Hindu temples built some 20 years ago.

One of his die-hard supporters, Mark, who works in the IT sector was of the view that Indian-Americans are not taking away the jobs in his sector.

“They bring in quality and diversity,” he said, displaying a banner which read Trump supporters are silent majority. In his 40-minutes speech, Trump reiterated his promise of building a wall along the US-Mexico border.

New Jersey governor Chris Christie who endorsed Trump yesterday also spoke at the rally. Trump is a strong leader and is the best among others in the fray, Christie said.

Hundreds of people came to the Trump rally hours in advance. The venue was full hours before he arrived.

Latest polls indicate that Trump is leading in 10 of the 11 states, except for Texas where he is giving a tough fight to his main rival and Texas Senator Ted Cruz.

“We might even win Texas,” Trump said, as he continued to lash out on Cruz and described him as a liar.

“We can be better than ever before,” Trump said.