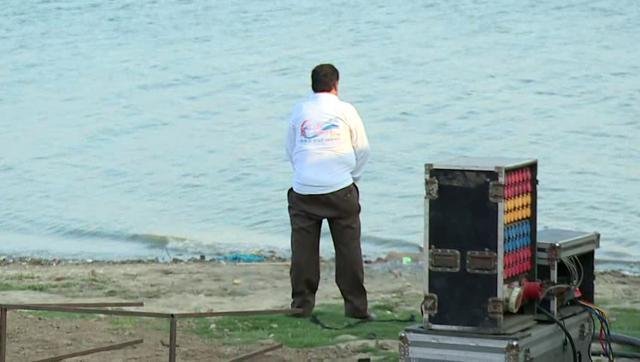 Photographs and a short video clip of an additional district magistrate (ADM) urinating in open close to the Triveni Sangam — the holy confluence of Ganga, Yamuna and the mythical Saraswati — considered sacred by lakhs of Hindus, has gone viral on social media.

As per reports, the photographs were clicked on Sunday when the senior PCS officer was at location to discuss arrangements for Triveni Mahotsav, which kicked-off on Tuesday.

The incident took place immediately after the District Magistrate Sanjay Kumar wrapped up a media briefing of the Triveni Mahotsav at Allahabad Boat Club and for which all officials including the DM and the ADM (Nazul) were sporting specially embossed t-shirts ‘Clean Ganga’.

The ADM’s act, at a time when stress is being laid on Clean India mission has left many upset.

“It is an unpardonable offence and a condemnable act. The entire country led by the PM is working towards cleaning Ganga and Yamuna while this official has shown disrespect to the holy river as well as the sentiments of the people. The DM, Allahabad should immediately take action against him. I also urge UP Chief Minister Akhilesh Yadav to suspend this official,” Bajpai told Hindustan Times.

Bajpai said that he was sending the photographs and the clipping to the union water resources, river development and Ganga rejuvenation minister Uma Bharti as well as Prime Minister Narendra Modi.

The official, following his photographs and video urinating close to Sangam going viral, has expressed regret and cited ill health as the reason for the act. “I deeply regret the act. I am diabetic and could not control myself,” he said.

District magistrate, Allahabad Sanjay Kumar said that he has entrusted inquiry into the incident to chief development officer, Allahabad Atal Rai. “I will act after getting his report,” he added.