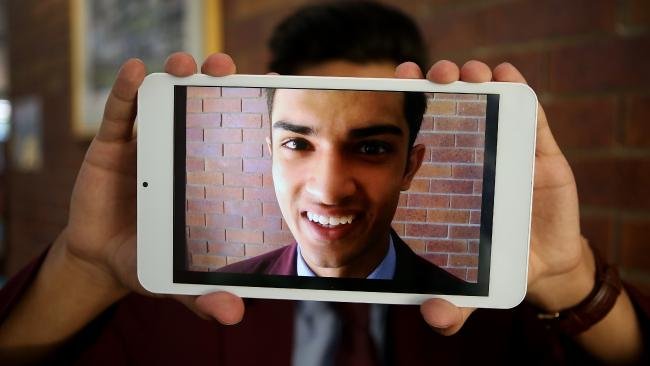 Fast forward to 2016 and Taj may very well be able to lay claim to the title of being the next Steve Jobs.

The 16-year-old is the co-founder and chief executive of software company ­Fiftysix, a company established in late 2014 that produces tablets for both the private and not-for-profit sectors.

The company already has “about nine fulltime staff” across Sydney, Melbourne, London and San Francisco and “about 15 to 20” part-time contractors across other parts of the world.

“(Fiftysix) was the result of two childhood passions, my love for Lego and my love for 21st century technology,” Taj, who has attended John Paul College since ­preschool, said.

“We’ve got our for-profit side, which is all about schools, consumers, the ­retailers … and then we do a lot of not-for-profit stuff as well, helping ­underprivileged children (both in Australia and throughout Africa).”

While Mr Jobs was a high-profile software figure, Taj has two people closer to home he idolises.

“When I’m with (JPC alumni) Matt Burgess, he’s a lawyer, and we do all our legal side with Matt and his team … one day or one phone call with him, I just learn so much,” he said.

“Holly Ransom, she’s one of my mentors, she was the chair of the (Youth Summit) for the G20 summit.

“It’s great to be able to have these people that I can call up at any time.”

Taj started his first business venture as an 11-year-old, when he started a technology website.

“I had companies such as Nokia, Samsung and more sending out their new products to me for a review,” Taj said.

“They would say take as long as you need and send it back when you’re finished, which was pretty cool.”

Now Taj’s latest initiative is paying off, making the 4am starts worthwhile.

“With school, it does get quite full-on,” he said.

“Everyone (in the company) wakes up at 4am my time … but we all said there’s no other time we can structure meetings.

“After school I do about two hours of phone calls, and then get started with a bit of school work.”