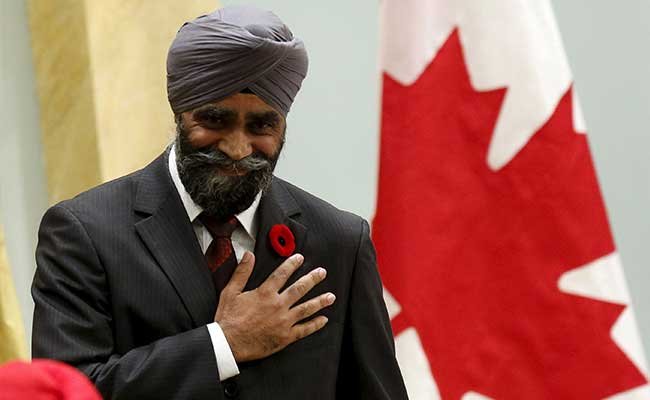 Toronto:  Canada’s first Sikh Defence Minister Harjit Sajjan has been heckled in Parliament with an opposition member shouting that lawmakers needed an “English-to- English” translation as he spoke, an act dubbed as “racist”.

Veteran Conservative lawmaker Jason Kenney sparked a controversy in the question period in Parliament with the heckle directed at Mr Sajjan while the minister was responding about the military mission against the ISIS.

The 45-year-old was named Canada’s Defence Minister in November as Prime Minister Justin Trudeau’s 30-member Liberal cabinet was sworn in. He is a combat veteran and has served in Bosnia and had three deployments to Kandahar, Afghanistan.

He was born in India and moved to Canada with his family when he was five-years-old.

Mr Sajjan’s fellow Liberals were quick to pounce on Mr Kenney, describing his heckling on Monday as racist, the Huffington Post Canada reported.

After question period, Liberal Kevin Lamoureux rose on a point of order asking Mr Kenney to apologise for an “inappropriate comment” directed at the Defence Minister.

Mr Lamoureux charged that Mr Kenney “stated from across his seat that we need to have English-to-English translation” while Mr Sajjan was speaking.

“I’m wondering if the member would do the proper thing and apologise or at the very least explain his comments,” Lamoureux was quoted as saying.
Mr
Indian-origin Liberal lawmaker Ruby Sahota did not mince words, calling Mr Kenney’s refusal to apologise “unacceptable.” “Shame on @jkenney for his racist remarks during today’s qp toward #harjitsajjan. His refusal to apologise is unacceptable,” she tweeted.

Mr Kenney rejected calls to apologise in the House of Commons. Later, he took to Twitter to explain why he made the comment, saying he found the minister’s answer “totally incoherent.”

Another Indian-origin lawmaker Raj Grewal said, “Kenney should apologise for his comments in question period today when Harjit Sajjan was speaking.”

Mr Kenney responded to Mr Grewal, saying he respects Mr Sajjan — “a fine, intelligent man” — and featured him as “a role model in the Discover Canada Citizenship guide” when he served as immigration minister.

“Unfortunately, I find his answers on ending combat against ISIS to be at best unpersuasive (and) at worst incoherent,” Mr Kenney wrote, adding he was sorry if his comment was “misconstrued in any way.”