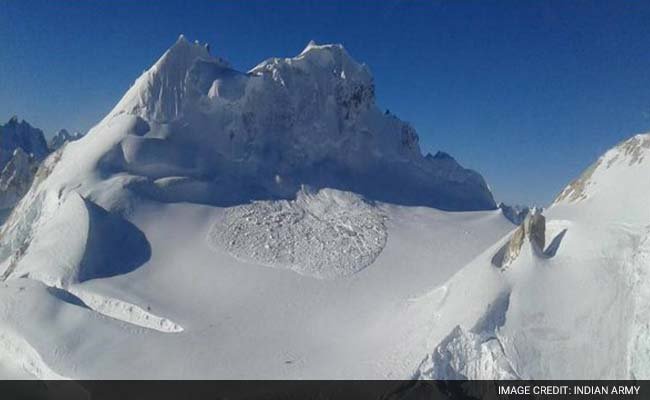 Jammu: The Army today said the chances of finding 10 soldiers missing after a massive avalanche at the Siachen Glacier yesterday are “very remote”.

“It is a tragic event and we salute the soldiers who braved all challenges to guard our frontiers and made the ultimate sacrifice in the line of duty,” the Army said in a statement which stressed that rescue operations are continuing.

“I salute the brave soldiers who gave their lives to the nation,” Prime Minister Narendra Modi tweeted.

The Army has also said it does not need Pakistan’s help in the search since its own teams are already in the area. The Pakistani military had offered its assistance earlier today.

The base is located on the Saltoro ridge in Siachen at a height of 19,000 feet above sea level.

Rescuers with dogs are carving through massive chunks of ice to search for the soldiers who have been missing since a wall of ice, a kilometre wide and 600 metres high, came crashing down on their post early yesterday.

The Army said rescuers are working in temperatures between minus 42 and minus 25 degrees centigrade to navigate the extremely treacherous heights of the Saltoro ridge (directly West of the Siachen glacier) upon which the soldiers were based at a post located at 19,600 feet.

The Indian Army rescuers at the site of the avalanche are some of the best trained and equipped in the world, but it seems unlikely that the fibre-reinforced huts used by the soldiers withstood the force of the avalanche. Also, the oxygen tanks they would have been using would be running out by now.

The Siachen Glacier, located at the northern tip of Kashmir, is the highest and coldest battlefield in the world at an average altitude of 20,000 feet.

More soldiers have died because of the weather elements than as a direct consequence of the Indo-Pak standoff at Siachen. At least 869 officers and soldiers have been killed here because of the inhospitable terrain and weather since India moved in to the Saltoro Range and the Siachen glacier in the mid-80s.