‘We can change this’: World leaders at UN approve plan for refugee crisis 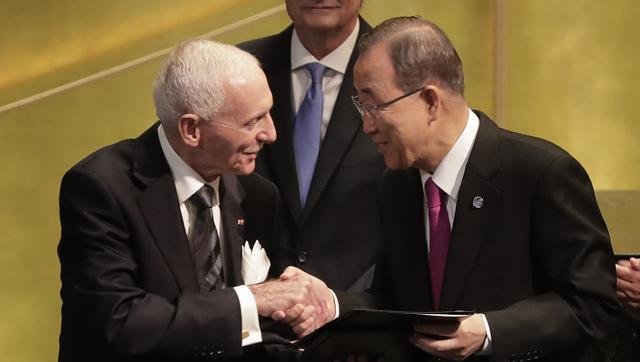 With more people forced to flee their homes than at any time since World War II, global leaders on Monday approved a declaration aimed at providing a more coordinated and humane response to the refugee crisis that has strained resources and stoked divisions from Africa to Europe.

The issue of what to do about the world’s 65.3 million displaced people took centre stage at the UN General Assembly with leaders from the 193 member states converging on New York for the first-ever summit on Addressing Large Movements of Refugees and Migrants.

“The bitter truth is this summit was called because we have been largely failing. Failing the long-suffering people of Syria, in not ending the war in its infancy. Failing others in now chronic conflict zones, for the same reason. Failing millions of migrants who deserve far more than lives marked by cradle-to-grave indignity and desperation,” said Zeid Ra’ad al-Hussein, the UN high commissioner for human rights.

Zeid praised the political consensus reached in approving the New York Declaration on Migrants and Refugees, but warned against complacency and self-congratulation.

He said xenophobia is a major factor contributing to failure thus far.

“We can change this … but not when the defenders of what is right and good are being outflanked in too many countries by race-baiting bigots, who seek to gain, or retain, power by wielding prejudice and deceit, at the expense of those most vulnerable,” Zeid said.

The declaration no concrete commitments and is not legally binding but rather calls on countries to protect refugees’ human rights, boost humanitarian aid and increase resettlement of refugees.

“Today’s summit represents a breakthrough in our collective efforts to address the challenges of human mobility,” said Secretary-General Ban Ki-moon, adding that the declaration will mean “more children can attend school; more workers can securely seek jobs abroad, instead of being at the mercy criminal smugglers, and more people will have real choices about whether to move once we end conflict.”

The document seeks to standardise responses to refugee situations and provide better education and jobs to refugees. It also encourages resettlement and includes plans for a campaign to combat xenophobia.

That may prove an uphill struggle as the declaration comes at a time that refugees and migrants have become a divisive issue in Europe and the United States.

A number of countries rejected an earlier draft of the agreement that called on nations to resettle 10 percent of the refugee population each year, something that has led several human rights groups to criticize the document as a missed opportunity. The US and a number of other countries also objected to language in the original draft that said children should never be detained, so the agreement now says children should seldom, if ever, be detained.

The declaration paves the way for negotiations on a pair of global compacts, one providing guidelines on the treatment of migrants in vulnerable situations and another on seeking more equitable burden sharing in support of the world’s refugees.

According to the UN Refugee Agency, refugees are people forced to flee due to armed conflict or persecution, while migrants choose to move in search of a better life. Around the world, there are currently about 21.3 million refugees, 3.2 million asylum seekers, and 40.8 million migrants.

More concrete progress is expected at a follow-up summit on Tuesday called by President Barack Obama, where at least 45 countries are expected to make pledges that are in line with US goals of increasing humanitarian aid by $3 billion, doubling resettlement and increasing access to education for 1 million youngsters and access to employment for another million of the displaced.

“You hear all around the world the UN hasn’t handled the refugee crisis. The way the UN will handle the refugee crisis is if all of us countries within the UN step up and dig deep and face those political headwinds that we all face, to do more, to give more, to take on a greater share of the resettlement challenge,” said Samantha Power, the US ambassador to the UN.

Prior to the pledging summit with world leaders, Obama will host a meeting with top executives from 50 companies to discuss what the private sector can do to help address the problem, Power said.