After weekend bombings, Obama asks Americans not to ‘succumb to fear’ 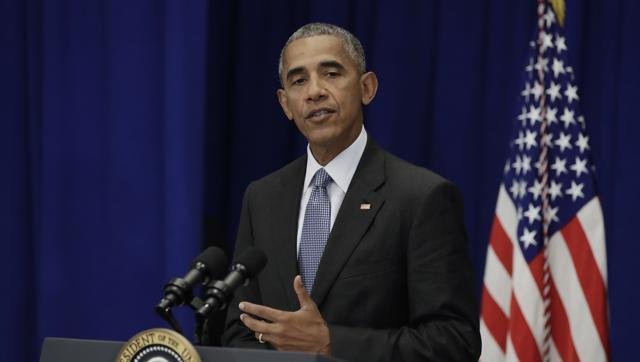 President Barack Obama on Monday lauded the “tough” and “resilient” people of New York and New Jersey, the twin-cities which saw bombings over the weekend. As law enforcement authorities arrested a 28-year-old Afghan-origin American in connection with the bombings, the POTUS asked Americans not to succumb to fear terrorists and violent extremists are trying to instill.

Obama, who is in the city for the high-level segment of the UN General Assembly, praised the “tough” and “resilient” response of the people of New York and New Jersey to the weekend’s bombing plots.

“Folks around here, they don’t get scared. They go about their business every single day. That’s the kind of strength that makes me so proud to be an American,” Obama said.

He added that terrorists and violent extremists don’t just want to cause harm to individual people but want to “inspire fear in all of us, and disrupt the way we live, to undermine our values”.

“They are trying to hurt innocent people, but they are also trying to inspire fear in all of us. We all have a role to play as citizens in making sure we don’t succumb to that fear,” Obama said.

Obama was speaking shortly after 28 year old Afghan-born American Ahmad Khan Rahami, wanted in connection with weekend bombings in New York and New Jersey, was taken into custody following a shootout with police.

Obama did not mention Rahami by name but said there is “a person of interest who is the focus of the investigation”.

He noted that law enforcement is asking for the help of the community and that the investigation into the bombing “is moving rapidly and if you see something suspicious, then you need to say something,” he said.

He also asked that the press try to refrain from “getting out ahead of the investigation”.

The FBI and other federal agencies are out in strong force in the area because of the UNGA meeting happening here now.

They are “moving smartly” together, Obama said as he urged reporters to “stick to what our investigators say.

He said he sees no connection between the bomb plots in New York and New Jersey and the stabbing in Minnesota.

Obama did not point out a link to international terrorism, but said “we will continue to lead the global fight” against those instigating others to carry out attacks over the internet.

“They are continuing to lose ground in Iraq and Syria,” and as they lose territory it helps counter-terrorism efforts to undermine their ideology and make it harder for them to recruit,” he said.