Belief that we’re the best is half the battle won: Sania Mirza 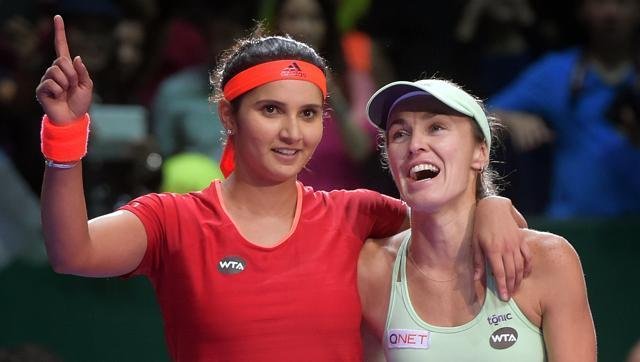 It was a choice between playing both singles and doubles on the WTA Tour and shortening her career or focusing solely on the team game to be able to play to her fullest. Her professional career had been hampered by injuries and when it was clear that her body wouldn’t be able to cope with the demands, Sania Mirza made a decision three years ago. Many questioned, some argued while others felt she was taking the ‘easy route’ out. On Sunday, as the 28-year-old stood proudly on the podium in Singapore with her second WTA Finals trophy and as the best doubles player in the world, she knew there would be no more questions.

Last year when Mirza and Zimbabwe’s Cara Black qualified for the $7million year-ender, it was their maiden run. Not only did she become the first Indian to clinch the title but on Sunday when she retained it, albeit with a different partner, it was the perfect way to end the season.

With Black, Mirza achieved glory but when the Indian combined forces with Swiss miss Martina Hingis in March, a run which only can be described as magical, began. The 35-year-old compliments her game and that booming forehand which opponents have still failed to break down. Hingis is almost as agile as she was 15 years ago as she races down the court or at the net to finish off points. They have become friends which is much-needed in such partnerships and have even started calling themselves ‘SanTina’.

When they came together, just a couple of days shy of the Indian Wells tournament, Mirza and Hingis were hoping the new combination would work. They won without dropping a set. Nine titles later, which include two women’s Grand Slams, the Indo-Swiss duo ended the season as the best. Spaniards Garbine Muguruza and Carla Suarez Navarro literally had no answer to those booming forehands which Mirza kept hitting on Sunday. In 66 minutes, it was all over. The scoreline read 6-0, 6-3 in favour of the world No 1 pair. They had ended their season just as they had begun, winning without dropping a set.

In fact, since March, they’ve only lost nine sets. For the statistically minded, the final win was their 22nd on the trot, having last lost a match in August in Cincinnati. It was particularly memorable for Hingis as she completed 50 WTA doubles wins, a milestone only 15 before her have reached.”It’s about choosing the right partner,” smiles Hingis.

When Mirza decided to focus on doubles, the aim was to become the best. She finished 2013 breaking into the top 10 and after that it was just a matter of time as she inched closer to the summit. In April this year, she clinched the elusive No 1 spot and has refused to part with it since.

With such a dominant partnership whereby they’ve lost just one final in Rome, it’s the belief and confidence which have played a huge role. “We do feel very confident every time we step on the court… We do feel, believe we’re the best team out there… I think half the battle is won there,” explained Mirza after the win. “On court, off court, we have a lot of fun and it’s the perfect way to end the year for us.”

With such chemistry, a dream of a Calendar Grand Slam is not farfetched and that’s already next year’s target for SanTina.