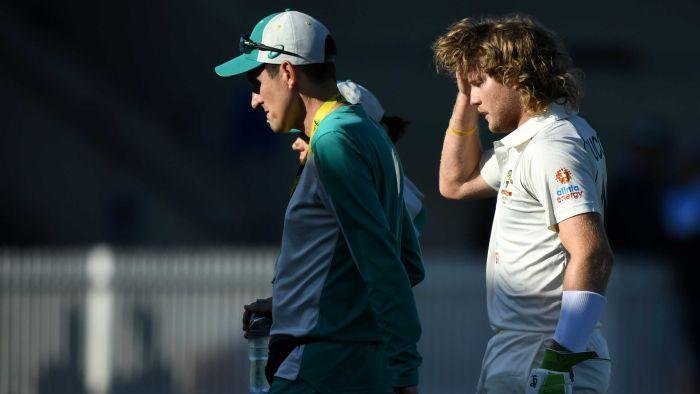 Will Pucovski is expected to be ruled out of the Boxing Day Test against India, while Joe Burns is set to play after being cleared of serious damage to his arm.

Pucovski was sidelined from the first Test in Adelaide, which Australia won by eight wickets, after suffering the ninth concussion of his career earlier this month.

He is likely to remain unavailable, with Australia adopting an understandably conservative approach as the Victorian continues his recovery.

Burns copped a nasty blow to the elbow on Saturday when his unbeaten 51 helped Australia complete its win at Adelaide Oval.

The opener was clearly bothered after being struck by the Jasprit Bumrah delivery but batted on, finding form as he outscored India’s entire second innings in the lopsided day-night Test.

There were fears Burns, who was sent for scans, could join Australia’s extensive injury list.

But the Queenslander has been cleared of a broken arm and is set to open at the MCG, where the hosts will pursue a 2-0 series lead in the four-Test series.

The identity of Burns’s opening partner remains up in the air, although the growing expectation is that Australia will stick with an unchanged XI and give David Warner a further week and a half to recover from his groin strain.

Warner, who rushed to Melbourne on Saturday amid growing concerns about Sydney’s COVID-19 cluster, is yet to give up hope of convincing Australia’s medical staff and coach Justin Langer he is ready for the rigours of Test cricket.

Time is against the former vice-captain, although he is renowned for his fitness and has been working diligently in recent weeks.

Recalling Warner, be it for the second or third Test, will mean a member of the middle order has to make way.

Cameron Green, who bowled nine overs in India’s first innings then clutched a low catch to dismiss Virat Kohli as the tourists slumped to a record-low total of 36 on day three, and Travis Head are the obvious candidates.

Matthew Wade served as a makeshift opener in Adelaide, sharing a 70-run stand with Burns in the final innings of the pink-ball Test.

Australia’s Test squad will train on Monday and travel to Melbourne on Tuesday. Disclaimer: This post has been auto-published from an agency feed without any modifications to the text and has not been reviewed by an edito