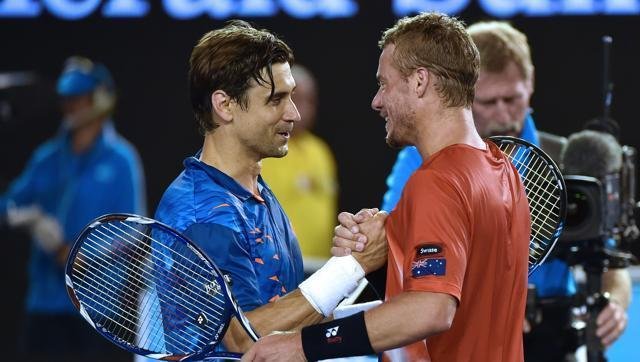 David Ferrer ended an era in Australian tennis by ending the singles career of former world number one Lleyton Hewitt, sending the veteran Aussie into retirement with a 6-2, 6-4, 6-4 victory in their second-round clash at the Australian Open on Thursday.

Hewitt, a two-time grand slam champion, scrapped for all his worth against the tenacious eighth seed but was unable to extend his record 20th and final appearance in the Australian Open men’s singles to the third round.

Once he has completed his doubles duty with Sam Groth, Hewitt’s playing career will be over and he will turn his thoughts to becoming Australia’s Davis Cup captain.

“I left nothing in the locker room. My whole career I’ve given 100 percent,” the watery-eyed 34-year-old said on court after video tributes from the likes of Roger Federer and Rafa Nadal were played on the Rod Laver Arena screens.

“I love coming out here and competing. I’ve been so fortunate to have that opportunity 20 years in a row.”

Ferrer was in no mood for sentimentality as he hustled his way to victory after Hewitt’s periodic fightbacks brought the crowd into the match, but was generous in his praise for the former Wimbledon and U.S. Open champion.

“It’s a sad day. I never had idols, but Lleyton was one for me,” Ferrer told the crowd.

“I have a museum in my house and I have a T-shirt of Lleyton. It’s the only T-shirt I have of a tennis player.”

Fans on Rod Laver Arena, including the Fanatics who have followed him everywhere, did their best to motivate the man.

Chants of “here we go Rusty” or simply “COME ON!!” in reference to the war cry Hewitt has trademarked throughout his career filled the air.

Every Hewitt winner was met with full-blooded zeal. Every unforced error with a collective sigh.

Ferrer’s winning shots, meanwhile, were met with polite applause, no matter how brilliantly played, but he did not mind.

“Tonight was Lleyton’s, not mine,” he said.

The crowd sensed this was to be Hewitt’s last stand when Ferrer won the first set after breaking serve twice despite some typically pugnacious defence from the Australian who will go down in the history books as one of the game’s true warriors.

Ferrer needed just one service break to seal the second set, though it was a hold by the Spaniard when he was leading 4-3 that encapsulated the entire match.

Sensing the possibility of one of his characteristic fightbacks, the ‘Fanatics’ whipped the crowd into a frenzy as Hewitt eeked out seven break points in a game that lasted more than 15 minutes.

He was unable to land the killer punch though and Ferrer moved two sets ahead.

Ferrer grabbed an early service break in the third but still Hewitt would not budge, breaking for the first time in the match to level the score at 3-3.

Hewitt’s temper boiled over in the next game, however, when he was called for a foot fault, which led to an expletive being directed at the linesman.

He was warned by chair umpire Pascal Maria, who then was called “a freaking idiot” by Hewitt, though it did not fire him up enough to halt the inevitable.

“He was too good,” Hewitt said as his wife and family watched on.