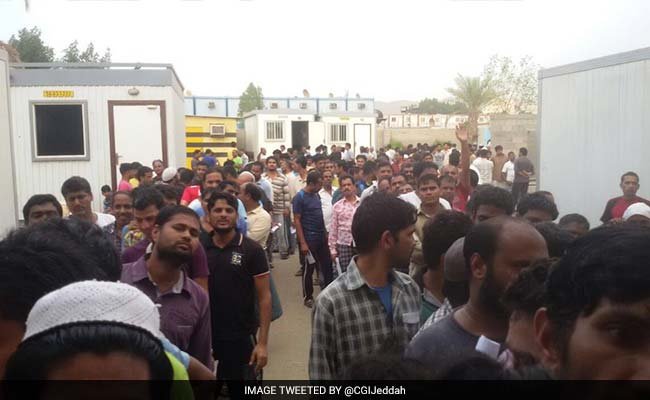 In all, 7,700 Indian workers of four companies in Saudi Arabia, affected by financial crisis, have been given shelter in 20 camps, External Affairs Ministry spokesman Vikas Swarup said on Tuesday.

Giving a breakup of the figures, Mr Swarup said 4,072 workers belonging to construction company Saudi Oger in Riyadh are in 10 camps: nine in Riyadh and one in Damman.

“In addition, there are 2,153 Indian workers belonging to Saudi Oger in six camps in Jeddah all of whom have been provided food by the Indian consulate,” Mr Swarup said.

The Indian embassy in Riyadh convened a meeting of community social workers and volunteers on Monday, wherein the Ambassador apprised them of the ongoing problems faced by the Indian workers and sought the help of the community in collecting information about the affected workers from different companies in the Kingdom, Mr Swarup said.

Each of the community workers were given a form to be filled in with the requisite information to be submitted to the embassy.

He said the information about each worker, about his total service, pending salary, desire to exit or to continue or to transfer to other companies was being collected separately.

“A team of the embassy is separately working in Dammam. This team yesterday met the labour officials to complete procedures related to the protection of legal dues of the workers, once they depart on final exit,” Mr Swarup said, adding that the team was also in touch with the affected workers in the region.

He said Minister of State for External Affairs VK Singh would be leaving for Jeddah on Tuesday night via Dubai.