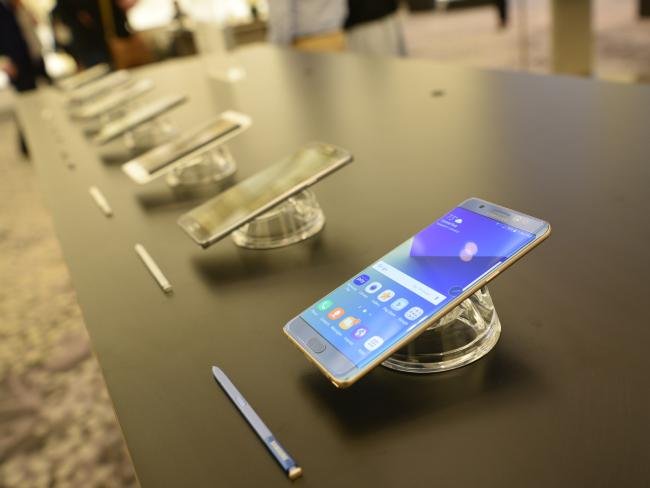 THE WORLD’S biggest smartphone maker has launched an aggressive pitch for new users with an eyeball-scanning, water-resisting, curved screen handset due to arrive in Australia just weeks before Apple is tipped to launch new iPhones.

Samsung’s new flagship smartphone, the Galaxy Note7, will appear in stores on August 19, but the company is already warning buyers of potential pre-order sellouts, thanks to a free 256GB memory card offer and unprecedented demand from telcos.

The South Korean tech giant revealed its latest flagship phone in New York’s Hammerstein Ballroom this morning, showing off a big-screen, $1349 device that is lighter than its predecessor but adds more storage, water resistance, and security features including a iris scanner that works through spectacles and contact lenses.

The Note7 will be the first Samsung phone to feature an eye scanner for security, in addition to the phone’s fingerprint scanner.

To scan the user’s eyes, the smartphone uses a third camera with an infra-red beam to capture identifying features in the irises. The scanner works about 30cm away from the user’s face and, after the initial scan, will identify a user’s eyes through clear prescription glasses or contact lenses.

Samsung Australia chief marketing officer Phil Newton said the eye-scanning technology was “the most secure” way to secure information in a smartphone, and could also be used to lock down individual files or apps in a Secure Folder feature inside the phone.

“You don’t have to use the iris scanner but it’s the easiest way to lock things away,” he said. “History tells us that Note users have intense security needs.”

Mr Newton said the Note7 would also address a “problem” from the last model that limited users to just 32GB storage with no space for a memory card.

“The big call out for us in the Note 5 was that it lost the ability to expand storage — that was a massive issue for Note users — so we brought that back. And we will give away a 256GB card as our pre-sales offer,” he said.

The $300 memory card will only be available with pre-orders between August 5 and 18, he said, and demand from Australian phone carriers was “far outstripping supply”.

“Based on the current demand, most likely (the phone will sell out), yes,” Mr Newton said.

Samsung will also launch a redesigned $159 Gear VR virtual reality headset with the Note7, and the phone will also feature a new USB-C connection.

“It’s straight out of the playbook from Samsung to try to upstage Apple by announcing its handset one month earlier,” he said.

“That said, I don’t think it’s going to be as big a year for Apple as it might have been in previous years.”

Sales of Apple iPhones fell again in the second quarter of the year, according toCanalys, to 40 million handsets worldwide. Samsung claimed top spot with 80 million smartphones sold, following the launch of its Galaxy S7 and S7 Edge handsets in February.

Canalys senior analyst Tim Coulling said Samsung’s virtual reality technology had also helped the company pull ahead of its major rival, but both companies needed to innovate to head off competition from Chinese phone makers including Huawei and Oppo.