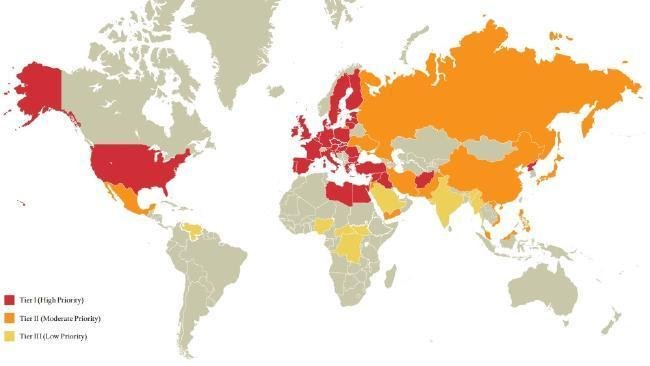 WAR, terror attacks, refugees and political instability — if you’re looking for something to worry about in 2016, you are spoiled for choice.
That’s according to the US Council on Foreign Relations, which has released a report detailing the most likely, troubling events looming in the year ahead.
It’s based on crowdsourced fears from more than 1000 members of the public that have been distilled by academics, government officials and foreign policy experts into 30 real threats to international security.
While the survey specifically relates to threats to US security and national interests, the country’s central place to world affairs means it reads like a catalogue of the most troubling events around the world.
Not surprisingly, intensification of civil war in Syria is deemed the number one threat to security and national interests with a “highly likely and liable to have a high impact on the US”.
The possibility of a terror attack on mainland USA or a treaty ally was the second-biggest fear, followed by a severe crisis with North Korea triggered by a military provocation or internal source of instability.
Centre for Preventive Action director Paul Stares said the Preventive Priorities Survey 2016 is designed as a tool to sharpen the minds of policy makers and encourage them to concentrate their efforts on the most pressing global issues.
He said relying on official confirmation could narrow the course of actions available and make them more costly to carry out.
“Anticipating areas of instability and, in particular, plausible contingencies that could harm US interests can help to trigger early action and thus reduce the likelihood of belated and costly responses,” he said.

It’s a timely reminder for global leaders grappling with how to tackle a wave of complex and interrelated problems triggered by instability in the Middle East. Lack of government resources and factional infighting in the region in 2015 have led to the rise of terror groups creating a refugee crisis and increasing the threat of terrorism in other countries around the world.
While problems in the Middle East occupied eight of the 11 top priorities listed, a crisis in the European Union was a new entrant to the catalogue of global woes.
The 500 experts surveyed saw political instability among member states due to differing opinions over how to manage the migrant and refugee crisis, as well as threat of homegrown terrorism, as a major worry for stability and longevity of the project.
Mr Stares said the list excluded economic crisis and natural disasters on purpose as these are difficult to predict in a “meaningful way”.
Potential crisis were ranked from high (likely to trigger US military involvement or threatens strategic resources) to moderate (affecting countries of strategic importance but without mutual defence treaties) to low (limited strategic importance).
Conflict in Iraq was replaced as a top priority, while Egypt, Libya and Turkey all rose on the agenda to become more of a concern.
Five totally new threats emerged from 2015 including the risk of instability in the EU and increased tension between Russia and NATO allies sharpened by conflict in the Ukraine and Turkey’s shooting down of a Russian plane last month.

• Intensification of civil war in Syria

• Mass casualty terror attack on the US

• Political instability in European Union resulting from migrants and refugees

• Violence and instability in Libya

• Increased tensions between Israel and Palestine

• Escalation of crime-related violence in Mexico

• Internal violence and stability in Pakistan

• Violence and instability in Lebanon

• Intensification of conflict in Ukraine

• Confrontation between US and Iran

• Armed confrontation in East China Sea between China and Japan

• Tensions between Russia and NATO

• Violence in Nigeria from Boko Haram

• Escalation of extremism in Russia