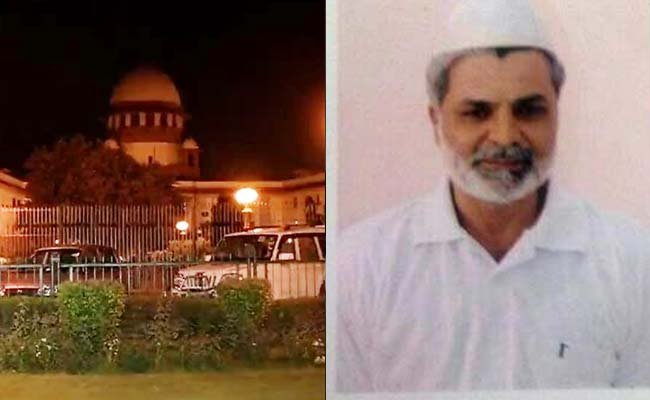 Yakub Memon, the lone convict sentenced to death in the 1993 Mumbai serial blasts case, was hanged to death at the Nagpur central jail on Thursday morning, less than two hours after the Supreme Court rejected his final plea in a dramatic legal tussle.

Yakub was hanged around 6:30am, on a day he turned 54. Earlier, it was planned that Yakub would be hanged at 7.00am. But there were changes in the plan at the last moment. His body will be handed over to his family on the condition that it will not be used for protests.

Yakub — brother of prime accused Tiger Memon in the serial blasts case — and 11 others were sentenced to death by a special TADA court in July 2007 for the dozen explosions that ripped through India’s financial capital, killing 257 people and leaving more than 1,000 injured.

The only well-educated member of the Memon family was found guilty of criminal conspiracy, arranging money for buying vehicles used by the bombers and organising air tickets to Dubai for some of them.

On the final day, Yakub was woken by jail authorities around 4am, permitted to bathe and say his prayers, before he was led to the gallows. A constable who executed 26/11 attacks convict Ajmal Kasab at Pune’s Yerawada jail in 2012 carried out the execution, while the rope was sourced from outside.

According to reports, additional DGP Meeran Borwanar, jail superintedent Yogesh Desai, a medical officer and few others were present at the hanging yard. This was the 21st hanging at the Nagpur central jail since independence.

Yakub’s hanging came after 24 hours of dramatic developments during which the execution was cleared twice by the Supreme Court and once by President Pranab Mukherjee.

A three-judge bench of the Supreme Court headed by Justice Dipak Misra –- that began hearing a last-minute plea for deferring Yakub’s execution at 3.20am on Thursday –- ruled early morning that the convict had been given enough opportunities.

“It will be travesty of justice if the death warrant is stayed in a case of this nature,” the court ruled in its verdict delivered at 4.55am.

The ruling came at the end of a 95-minute open court hearing that saw Yakub’s lawyers questioning the government’s haste to hang the death row convict and insisting that the mercy petition was hurriedly rejected by President Pranab Mukherjee.

The President took his final call late on Wednesday night after consulting home minister Rajnath Singh, who said there was “no rethink” on the death sentence.

Prime Minister Narendra Modi, Singh and top officials, including home secretary LC Goyal, met at the PM’s residence and discussed the issue and felt that the President should be advised to reject the mercy petition.

India is one of a handful of countries worldwide to still have the death penalty but the rate of executions has slowed down to a trickle in the last two decades. Though hundreds of people are on death row, only three people have been executions have gone ahead in the last 18 years – rapist Dhananjoy Chatterjee in 2004, Mumbai attacks convict Kasab in 2012 and Parliament attack convict Afzal Guru in 2013.

Yakub had appealed to the President for mercy, for the second time, even while the Supreme Court was hearing the plea against his execution, earlier on Wednesday. The apex court dismissed Memon’s petition rejecting his argument that correct procedure was not followed in his case.

The apex court said there was no “legal fallacy” in the issuance of death warrant by the TADA court in Mumbai on April 30 scheduling Memon’s execution for Thursday.