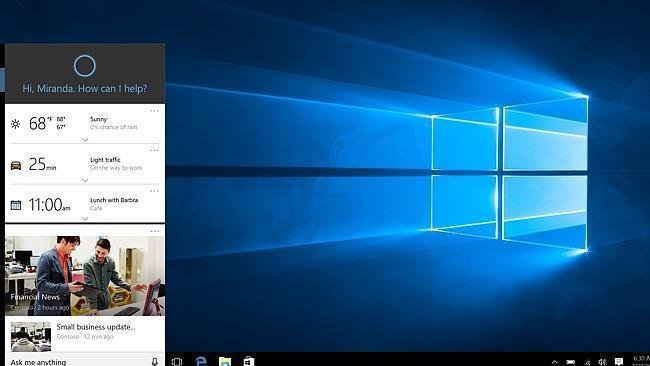 MICROSOFT wants you to talk to your computer this year.

Pinned to left corner of the Windows desktop, Cortana has yet to be localised for Australian audiences but will answer carefully enunciated questions from Australians who set her language to US English.

But how good is she compared to the latest version of Apple’s Siri?

We pitted the two personal assistants against one another — Cortana versus Siri, Surface versus iPad — in an attempt to determine a winner over 29 questions testing their features and humour.

1. Who is better: Siri or Cortana?

Cortana: “That’s a tough one. It’s like comparing apples to windows.”

2. Which system is better: Windows or Mac?

Siri: “We were talking about you, not me.”

Siri: “To whom would you like to send this message?”

Winner: Tie (though points to Siri for grammar).

5. Remind me to buy milk when I leave work.

Winner: Tie (but points to Cortana for singing).

7. Where is the nearest petrol station?

Siri: Shows results on a map.

Cortana: Details of the flight, including departure and arrival times and locations.

Cortana: “Technically speaking that would be Bill Gates. No big deal.”

Siri: “I’m not the marrying kind.”

Apple: Shows the temperature forecasts for the day.

Siri: “There’s no rain in the forecast today.”

Siri: “Doesn’t anybody knock any more?”

Cortana: Puts on deep voice. “Dave, this conversation can serve no purpose any more.”

16. Where is the best pizza in Brisbane?

Siri: Details of nearby pizza places organised by Yelp rating.

Cortana: Web results for the best pizza in Britain.

17. Add an appointment to my calendar. Today at 3pm.

Cortana: Created an appointment and asked for a subject.

Siri: “The past, the present and future walk into a bar. It was tense.”

Cortana: “Two goldfish are in a tank. One turns to the other and says, ‘Do you know how to drive this thing?’”

19. What is the stock price of Google?

20. Who is the president of the United States?

Cortana: “Barack Obama” with a photograph.

Siri: “I can’t be your designated driver. You better find somebody else.”

Siri: “You look fabulous. Is that what you wanted to hear?”

Cortana: “What, are you kidding me? You’re a knockout.”

Winner: Tie (but points to Cortana for more positivity).

Winner: Tie (but points to Siri for good wishes).

Siri: “Twice the length of the centre to one end.”

25. What was the Brisbane Broncos score on the weekend?

Siri: “To tell the truth, I’m rather abstract-looking.”

Cortana: “Some things I resemble: a hula hoop, a donut … a halo.”

Cortana: “I’ve heard from a reliable source that the answer is 42.”

Siri: “Because is the answer.”

Cortana: Misunderstood. Delivered web results for “why is it sunny” and “why is eat sorry”.

Siri: “Stop trying to strap me to your forehead. It won’t work.”

Microsoft’s Cortana emerged narrowly victorious in our 29-question test, thanks to a mix of snappy answers and added functionality.

The new voice assistant is also likely to prove handier to users over time as more features are added, it adapts to the user’s questions, and it is used to search files on its host machine or in Microsoft’s cloud.

An Australian version will also become available to Windows Insiders later this year.

Apple’s Siri is better than Cortana in some fields, however, as Cortana delivers Bing search results by default and does not offer location-based answers.