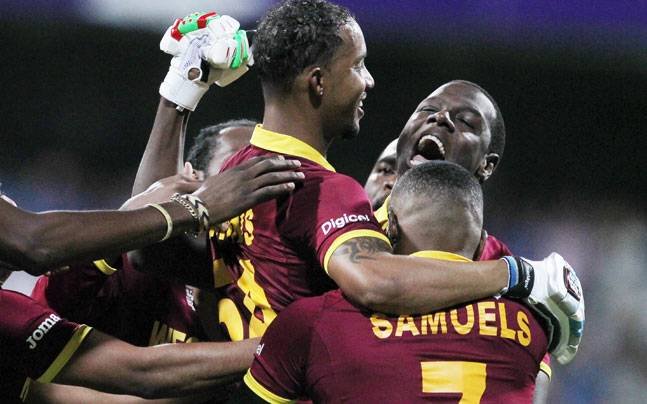 Another superb innings by Virat Kohli; a total of 192 to defend; an in-form bowling in their arsenal. To cap it, India were off to just the start they had dreamt of by getting Chris Gayle in the second over.

To lose it from that position needed some doing. India managed to achieve just that as their bowlers came up short to shatter a billion hearts and bow out of the World Twenty20 on Thursday.

A spectacular unbeaten 89 by Kohli was in vain as India went down by seven wickets against West Indies at the Wankhede Stadium in the semifinal. It was a brilliant fightback from the Caribbean men. Playing in an intimidating atmosphere with a partisan crowd egging the Indian team on, the West Indies players displayed nerves of steel to beat the odds. The most impressive was the fact that they proved they were not a one-man team, achieving the win without any contribution from Gayle.

Spin was supposed to be India’s strength. On Thursday, it proved to be the weak link in their bowling. Ravindra Jadeja was flat and bereft of imagination when up on a good batting track while R Ashwin seemed to have suddenly suffered a crisis of confidence after the hiding he got against Australia. The two were taken apart by the West Indies middle order, which staged a sensational recovery after suffering early jolts.

Jadeja conceded 48 runs in four overs, and after going for 20 off two, Ashwin was not brought back again. Hardik Pandya once again showed the tendency to get carried away by the big occasion and was punished for playing to the gallery, clobbered for 43 off four overs for an aimless effort.

After a fine batting performance, Ashish Nehra and Jasprit Bumrah had given India the perfect start. The two biggest names in the Windies line-up, Gayle and Marlon Samuels, were out for five and eight, but the lesser known names in the line-up remained unfazed. Instead they converted it into an opportunity to emerge from the shadows of the big names.

No one parties harder than the Caribbean people and the toast of their Islands on Thursday were Lendl Simmons, Johnson Charles and Andre Russell.

Mumbai Indians’ player Simmons made the most of his knowledge of the Mumbai conditions by stroking his way to an unbeaten 82 off 51 balls, opener Johnson Charles made up for Gayle’s early wicket with a free stroking 52 off 36 balls and Russell provided the final flourish with a typically aggressive 43 off 20 balls.

The most remarkable was Simmons’ effort. It was fairytale stuff from him. He had missed the first phase of the tournament due to injury, but got a second chance when Andre Fletcher pulled up injured. He flew in on the eve of the semifinal and hardly had any time to acclimatise. But to his credit, he showed no signs of rust to anchor the chase. He benefitted from India’s largesse on a couple of occasions, but had probably earned his luck.

For Kohli, the defeat will be particularly tough to take. He had carried the team thus far single-handedly and in the semifinal too, exceeded expectations with an all-round show. Apart from ensuring a strong total, he provided India the breakthrough when it was feeling the pressure by ending the 97-run partnership between Charles and Simmons. Sadly, his teammates were once again not up to the mark.