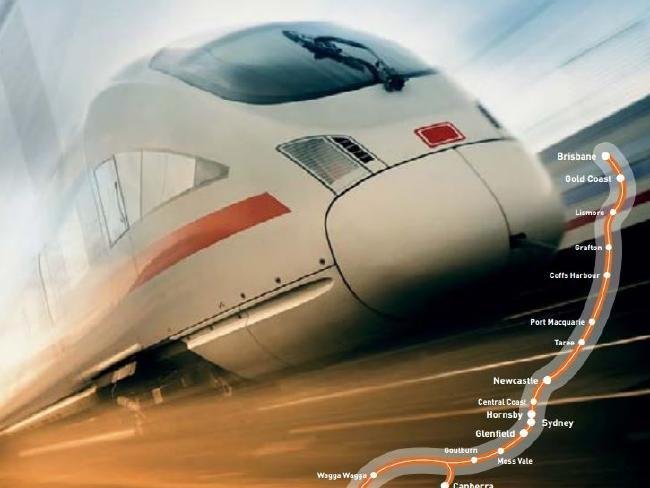 Children could be starting school at different times, people might actually be able to afford a home in the centre of Melbourne and high speed rail could finally be a reality.

That’s if the government looks into suggestions made by independent body Infrastructure Victoria and released in a new report that looks at a 30-year plan for Victoria.

Some of the ideas are actually very bold but Infrastructure Victoria chief executive Michel Masson told 3AW it’s time to really look at crazy suggestions.
‘We can’t look at the next 30 years and copy and paste the past 30 years,” he said.

“You have to be bold and look outside of the box.”

So what are the suggestions that could really change Melbourne’s future?

Many have asked for it and everyone has an opinion on it and now the suggestion has been tabled yet again.

The Infrastructure Victoria report is proposing a high-speed rail between Melbourne and Sydney to provide an alternative to flying.

“It is predicted that high-speed rail would attract a high share of the existing travel demand, thus decreasing the volume of traffic accessing Melbourne Airport via Tullarmarine Freeway,” the report said.

“This would reduce travel times and increase reliability between the airport and the city centre.

“In addition, the new high speed link could provide improved access from regional areas to jobs and services in the city centre.”

Infrastructure Victoria has found there is strong support for the project and it would help boost development in regional areas like Shepparton and Albury-Wodonga.

It is predicted business people and regional areas would benefit most from high-speed rail.

“The reduced travel times may actually make these regional centres viable as places to travel to and from Melbourne for work or education, meaning people wishing to do so would have access to the more affordable housing available,” the report said.

While there will be some impacts on the environment as a result of this project, Infrastructure Victoria said it could be built on undeveloped land and high speed rail would use less energy than aeroplanes.

“When paired with the reduction in airport car trips, it is expected to reduce local pollution and statewide greenhouse gas emissions,” the report said.

Melbourne and Sydney is the third busiest passenger flight route in the world, according to Infrastructure Victoria, with about eight million people flying the route each year.

Rising housing prices are making it difficult for young people to enter the housing market but Infrastructure Victoria has a plan to combat that.

It suggests developers should be required to include affordable housing in new developments.

“This option has the potential to meet the need to provide better access to housing,” the report said.

“Further work is required to determine the financial impacts for developers, the specific regulatory changes required and the appropriate mechanism to allocate the right to buy properties in an environment where demand is likely to significantly outstrip supply.”

Infrastructure said giving people access to more affordable housing would benefit the whole community, including the vulnerable and disadvantaged.

“The increase in affordable housing is likely to increase housing security for vulnerable groups and lessen demand for social housing, benefiting the state,” the report said.

With cheaper housing in areas that are high in demand means people will have better access to jobs and infrastructure.

Anybody doing the morning school run could probably remember a time they were stuck in traffic hoping their child wasn’t going to miss the bell.

Sometimes it can take almost an hour to get somewhere that is just 20 minutes away.

But Infrastructure Victoria has a bold plan that could alleviate the morning stress.

The independent body thinks Victoria should give children different start and finish times.

“This option is a low cost option,” the report said.

“Many schools already stagger start and finish times to manage better use of school campuses.

“Implications for planning for timetabling, inter-school events, after school hours care, cleaning and maintenance schedules, availability of teachers etc would need to be carefully considered.

“We think that this option would work best for schools where students can independently travel to and from school either by walking, cycling or public transport.

Infrastructure Victoria said with students starting at different times, classrooms could be used better, reducing the number of schools needed in the future.